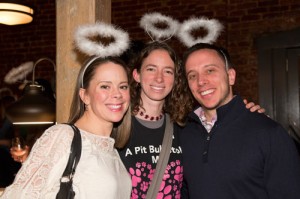 An apology to the readers: Due to plague and personal issues, this story is not as timely as it should have been (a big journalistic no-no). I still wanted to provide a little snapshot for those who were not able to attend the BowWowZa Awards; as it was a delightful evening and quite worthy of coverage.

So often, rescue work is described as thankless and draining. While rewarding for the heart, there aren’t traditionally awards given out to people who are just trying to do the right thing and make a difference.

That’s why the folks of Show Your Soft Side wanted to host a little treat for those who work so tirelessly to save the lives of Baltimore’s abused, neglected and homeless animals; a thank you of sorts, and recognition that what they do matters and is appreciated. Mostly, it was meant to be a night of fun and laughs.

The BowWowZa Awards was the perfect reason to take a break from the daily grind and celebrate the accomplishments of those within the rescue community. Oh, and to enjoy delicious wine and food. Thanks to the hospitality of Denise Whiting and staff, Café Hon transformed into the most happenin’ softie spot in Baltimore – chock full of rescuers, supporters and softies themselves who all braved the cold weather for this special night. 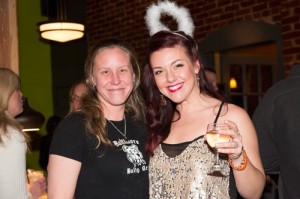 Café Hon was packed nearly elbow-to-elbow, which, at the very least, made making new friends quite easy. Folks chatted, mingled, and munched – then around 7:00, it was time to get the awards presentation started. “Presentation” is probably too formal a description; it was more like a continuous, hilarious interaction between people standing on stage and people standing on the floor. 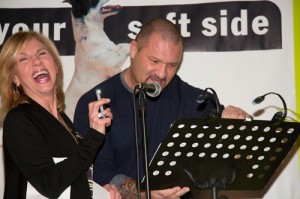 Getting the attention of a crowd was no problem for 98 Rock’s Sarah Fleischer, who played emcee for the evening. Adding to the festivities were a few of our most notable softies, who were on hand to present the winner of each award category.  On hand to present were 98 Rock’s Justin Schlegel, MMA’s John Rallo, King Belvedere’s Johnny Sexx, the Baltimore Ravens’ Gerrard Sheppard, as well as Ravens Superbowl Champ Torrey Smith and his lovely wife Chanel. Historically, our Softies have all been men, but with the likes of Baltimore Police Officer Kelly Steinhorn and SCCA Pro Racing Playboy Mazda MX-5 Cup Series Driver Emilee Tominovich, we’d be silly not to have them present as well. 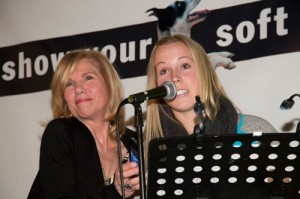 While this roster is indeed impressive, I think all in attendance would agree that the star guest of the evening was Mittens, the once-abused Baltimore cat who was named the 2011 ASPCA Cat of the Year. Just like the other softies, Mittens, along with her loving humans, took time to greet her fans (who were constantly offering her pets and head scratches) and enjoy some time in the limelight. Mittens was so adored by Softie Justin Schlegel that I’m fairly certain he would have put her right in his pocket and taken her home, had her people looked away. 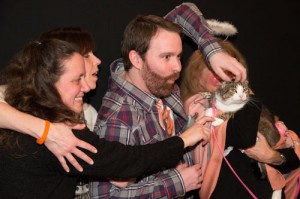 Now I am even catching myself getting caught up in the irresistible Mittens charm! You’re probably wondering by now about the awards and the winners, so let’s get back to that. Before I do, you are going to need a little bit of background for some of these unusual categories. I asked Sande how in the world some of the categories were decided, and she explained simply that if a category made them laugh, they went with it! 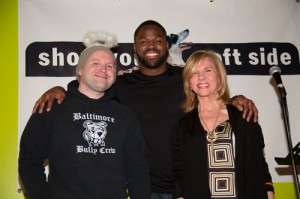 Turns out, a number of folks on the Show Your Soft Side secret nominating committee had the same question. “They were looking for the literal meaning when, in fact, we just wanted them to name the first person/rescue that came to mind when they heard the category. “

So, without further ado, here are your 2014 BowWowZa winners:

1.) Most likely to cough up a hairball:  Lizzie Ellis, The Feline Rescue Association

3.) Most deserving of their own reality show: BARCS

5.) Most deserving of having their picture on Pet Finder: Mary Swift and Meredith Brown

8.) Most likely to teach a barn cat to square dance:  Erin Harty

10.)Most likely to appear on Ellen: Mittens, AARF Spokescat/ASPCA Cat of the Year 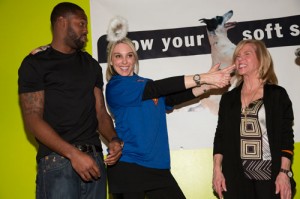 The winners were chosen not by online voting, or any other medium that could be influenced by the following size of the individual or organization. Instead, the three ladies behind Soft Side quite literally fought it out, and according to Sande, it did get a little tense at moments but of course was all worth it in the end.

”The other thing that I can’t say enough is we truly felt like every one of the people listed deserved to win (as well as some who weren’t listed).  That caused the most fights between us because none of us wanted to see ANYONE lose.  To that end, we tried to come up with ideas/ways to honor everyone throughout the evening – hence the halos and gift bags.  I still wish we could have done more, but next year……it’s gonna be even bigger and better.” 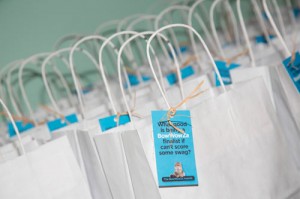 None of this could have happened without the unwavering support of Café Hon’s team. Denise Whiting, her second-in-command Lisa Davis, as well as the entire staff are “dyed-in-the-wool” animal lovers and graciously hosted an incredible party for Show Your Soft Side’s launch in 2011. Sande recounts an instance during one of their meetings when a stray dog literally walked into the bar. “Most people would say, ‘get that dog out of here,’ but not Denise & Lisa.  The pup sat at the table with us, was watered and fed while we searched for and finally found its owner.  That’s the kind of place Café Hon is, and, like I said, every time we’ve needed anything – Denise is the first to step up. “ 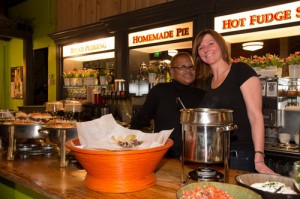 The women of Show Your Soft Side – Sande, Caroline, and Lori – all bring something different to the table, and it’s these differences, along with their respect for each other, that allow them to create these wonderful, meaningful campaigns and events. When Sande says that next year is going to be bigger and better, you best believe her!

Now, I can’t imagine anything much better than an evening that began with food and ended with softies, rescuers and supporters grouped together, jumping in photo booth shoots set with prop hats, mustaches and glasses, all laughing and having a great time…but stay tuned to see what’s in store for next year! It’s sure to be a hoot (or a purr, or a bark). 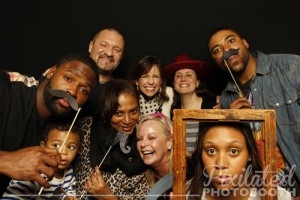