Some stories have the power to melt a million hearts while others barely get a second glance.  Such is the story of a plain brown dog, one of thousands found on the streets of Baltimore and deposited at BARCS.  This one came in with her tail between her legs, eyes that refused to look anywhere but down and a coat made up of one part fur to nine parts gaping, bloody sores.  A plain brown dog whose future looked grim in a shelter that continuously finds itself short of cages, space and funds. And that very fact disturbed one volunteer so deeply that she promptly filled out the paperwork, gently lifted the pup into her car and drove straight to her vet’s office.

Although Hailey, as the pup was later named, can’t tell us her story – her condition tells a tale of extreme malnutrition and neglect.  It also hints at abuse when you see her tentative movements around anyone new, especially males.  In the days that followed, the vet, his staff, along with Hailey’s rescue angel would suit up in disposable overalls to treat her sores and show her the first love she’d ever known.  They might still be wearing those overalls had not a chance encounter brought Hailey together with a man known as The Dog Chef.

It happened the night of Pawject Runway.  That afternoon, we heard The Dog Chef, (also known as Kevyn Matthews) was in town so we invited him to be our guest at that evening’s event.  For Hailey’s rescue angel, it was kismet and she promptly asked for his help.   Within a week, Hailey found herself on a nutrition regimen most humans would be jealous of – freshly prepared meals and snacks created to soothe her allergies and heal her shell-shocked skin.  All of which were prepared by Kevyn and shipped from New York, along with weekly visits to Baltimore to monitor her progress and get a personal belly rub from the chef. 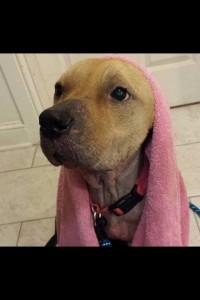 Hailey’s road to recovery isn’t over yet.  Recently, she went to a live-in train and board situation to help smooth some of her rough edges, rough edges that are easily overlooked when you see her joy at receiving any kind of positive attention.   Her fur is slowly growing back.  Her tail wags almost non-stop.  And she’s yet to meet a lap she doesn’t like.  Hailey wants what all of us are searching for – she just wants to be loved.

Our hope is that Hailey finds the kind of home she deserves and that there are more people out there who can look beyond what others see as a plain, brown dog.