In the not-so-distant past, your phone would ring and you wouldn’t have a clue who was on the other end.  Thank God those days are over, or I might not have answered that night.

I was at dinner with girlfriends and had just sat down when a very loud piano riff alerted everyone in the restaurant that I was getting a call.  I frantically dove into my bag to shut it off when I saw THE FACE – a very handsome, well-known face, especially among fans of the NFL.  “Hey Torrey, what’s up,” I asked nonchalantly, while tripping over tables to move to somewhere more private.  “You can’t tell anybody, not anybody – okay?” he said.  “Absolutely,” I answered totally freaking at the thought of all those diners who had just heard me shriek,“I gotta take this, it’s Torrey Smith.”  That was when he told me he was going to ask Chanel to marry him and wondered if he could do it at a “bogus Soft Side photo shoot.”

“Consider it done,” I said, my excitement at becoming an engagement broker building by the second.

We scheduled the shoot for that Friday evening and rehearsed the story.  We’d tell Chanel that we wanted to reshoot Torrey with their newly adopted rescue pup, Momma. You see, when Torrey first joined the “Show Your Soft Side” campaign, he and Chanel had one pittie named Prince, but they had both been so moved by learning about the number of homeless animals in Baltimore, they decided to expand their family.  So the idea of a second photo session with Prince and his little sister, Momma, made perfect sense, and Chanel bought it hook, line and sinker.

My husband would be the first to tell you, I’m not the best at keeping secrets, but wild horses couldn’t drag this one out of me.   In fact, when Leo, our photographer, first suggested bringing someone in to shoot video, I insisted we make sure it was okay with Torrey first.  It was, and everything was set when Torrey arrived, nervous as a kid on his first day of school.  Well, everything except for one small detail. “You can’t ask Chanel to marry you wearing that, “ I blurted out.  Not that he didn’t look his usual handsome self, but he was wearing a black tracksuit with dress shoes.  I mean really, who wants to look at their engagement photos twenty years from now wearing sweats?  Torrey thought a Soft Side t-shirt might do the trick so we put in a frantic call to my husband, who rushed over with his supply of animal shirts.  As much as we’d have loved to have Torrey wearing a “my soft side barks” shirt while asking for Chanel’s hand in marriage, the taste fairy in all of us decided on a Clevotine America bulldog shirt instead.

A few minutes later, Chanel arrived and we started to shoot Torrey with both dogs, Momma being her usual rambunctious puppy self. Which gave us the perfect opportunity to suggest, “Maybe Momma would be calmer if both of you were in the shot.” Chanel sat down and Leo started snapping pictures while Torrey fumbled to get the ring out of his pocket…not so easy when you’re wearing sweatpants.  But Torrey’s sure hands reeled in the ring and to say he pulled off the surprise of the century would be an understatement.  Chanel was so shocked and asked so many times, “Is this for real?” that we started to worry that she was never going to say “yes.” Happily for us all, but especially for Torrey, she finally did. 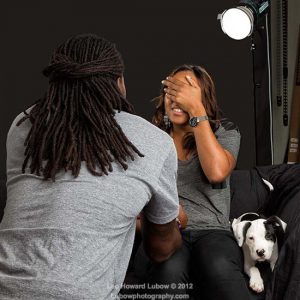 After the lovebirds finished tweeting, texting and calling both of their moms, as well as every girlfriend in Chanel’s considerable repertoire, we sent the couple home with flowers and dinner. As for Prince and Momma, they went home with special treats and a book of instructions on their impending roles as Best Pittie and Flower Pittie.

Postscript: In July of 2013 Torrey and Chanel were married. We understand Prince and Momma slept through the entire ceremony secure in the knowledge that it could not have happened without them.