A special installment by Show Your Soft Side photographer, Leo Howard Lubow.

When I woke up this morning I looked down and saw the covers moving. A small mound just under the blanket started heading toward my toes, then reversed itself and came charging toward my face. A few seconds later two great ears – mighty triangles, really — popped out of the covers, followed by some very large eyes – eyes that reminded me of Yoda, or maybe Steve Buscemi. Whoever it was rolled over on his back and asked for a tummy rub. While I could think of at least one better way to start the day, this certainly came in a strong second.
When I joined Sande Riesett’s Show Your Soft Side Campaign two years ago as a photographer, the intent was to deter animal abuse. But a strange thing has happened along the way. I’ve seen the campaign enrich the lives of a good many people, myself included.
But first, a quick detour.
Since the 1980’s I’ve loved cats. Even a cursory glance of my first Soft Side blog makes it clear I prefer them over dogs – at least I did at the time. Then one by one, we photographed men with their dogs, and one by one, I witnessed some very special relationships that made me think differently. (Hearing Sande say “awwwwwwwww” every shoot also helped.)

Dogs. I’ve always liked them, but in years past, never enough to bring one home. Not so my wife. Two years ago she got Ava, a 10-lb Havanese bundle of ain’t-I-the-one. Ava is attached to Annette by an invisible rope that’s about ten feet long. Wherever Annette goes, Ava goes. And if Annette actually leaves home without Ava, that little girl will sit in the kitchen and wait for her mama’s return. Wait and wait and wait. On occasion, I’ll lure her away with a treat, and wonderfully, she’ll actually hang out with me for a while, but sooner or later, and usually it’s sooner, she’ll return to her post. Life has many uncertainties, especially for little Ava, but one thing is certain: her keeper will eventually open the kitchen door, and the world will be right again. 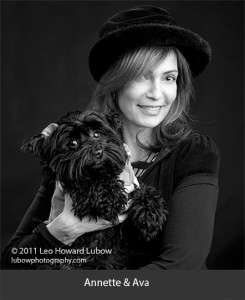 Being out of the loop, I had an inspiration. What if I got my own dog? But as a guy, would I have to get a large one? I’ve never wanted a big dog. I know they’re loyal, loving and man’s best friend, but I’m guessing they’re not for me. I know this sounds bad, but I don’t want to deal with a lot of mess. A friend of mine has not one but two Newfoundland dogs. Hearts of gold. Loving animals. But drooling machines. Running faucets of stuff. And big. Many pounds of shedding-fur big. These guys could play for the Ravens.
As for small dogs, they’ve never been a draw for me either. My sister has two miniature teeny-weeny tiny-toy la-la-la something-or-others. Little poofs of fur with piercing eyes and very demanding attitudes (though I’m guessing my sister had a hand in that). “Hey! You! I want a lap and I want it NOW. With a cheese-ball. The ones with peanut butter. Got it? No chicken dings.” They give my sister a great deal of joy, but no, I don’t want a poof-ball. 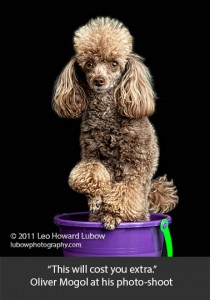 Get a Chihuahua, said a voice from within.

A Chihuahua? Really? Aren’t they snappy little demons that will take your finger off?

I’m not exactly sure how I settled on a Chi. I didn’t know the first thing about the breed. A friend of mine with three dogs did tell me his Chi was the best of the bunch. And not long after that, I saw a Chihuahua puppy playing in the grass, having the best time that any living being has ever had in this or any other universe. But that was it. All the information I had.

Then one day, Darlene Sanders of BARCS (the Baltimore Animal Rescue and Control Center) brought 15 kittens to the studio for a shoot, and right before we started I blurted out: “Darlene, d’ya have any nice Chihuahuas at the shelter, I mean, good guys who don’t growl and go to war?” I saw a twinkle in Darlene’s eyes, as if she knew something I didn’t, but all she said was, “Leo, let me work on that.” 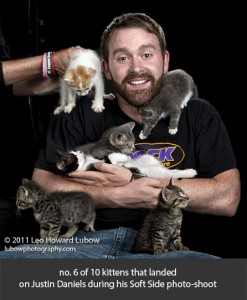 After that, all I was thinking was: what have I done?

Two weeks later, Darlene sent me an email that said that while she didn’t generally take to Chihuahuas, she did like this little guy named Archie, who’d been found at a Royal Farms six months earlier. After being taken to the shelter, Archie had somehow persuaded Danielle, a BARCS employee, into fostering him at her home, where he now hung out, along with three other dogs that were seven or eight times his size.

Within a week, I drove to BARCS with Lisa Feather, our Soft Side animal handler, to vet Archie. We spent 45 minutes with the little guy, indoors and out. He passed every test. Bottom line: he’s a love bug, and the worst that can be said of him is … he’s also a serial licker so bring your raincoat. 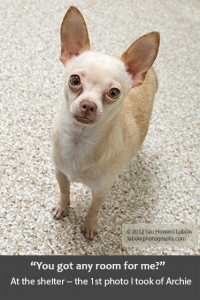 The following week Annette was going out of town to visit her parents. I waited for that to happen before I brought Archie home. I wanted just us guys to bond. No way did I want to deal with a love-fest trio of the three A’s – Annette, Ava & Archie. uh uh. I’m no fool. 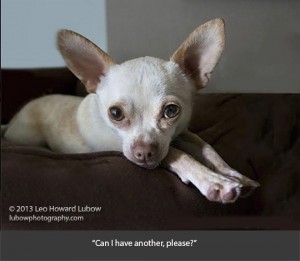 Luckily, the plan worked. That’s not to say Archie doesn’t hang out with the women. He does. Especially if the circumstances promise opportunity — like special attention from Annette, or relay races with Ava, or an empty yogurt cup to attack. But he also knows that guys have to stick together, so eventually returns to me as home base.

It’s been a year and a few months since Archie joined our home, and I can’t begin to describe the pleasure he gives us. Ava, for instance, loves to wrestle with him, and once in a while will even let him win. When they tumble and growl and pounce — and roll over and over and over — everything in the world stops. It’s better than watching a movie.

As for his manners, I don’t know where he learned them, but the little guy is so quiet and polite, he could’ve dined at Downton Abbey. No aggression, no begging, no whimpering. Just a calm and quiet demeanor, patiently waiting with grace and joy for the world to turn his way.

He’s also a star at stealth. On request, he’ll “disappear,” making him a great traveling companion. All I need to do is cover him, and on cue, he shuts down and goes to sleep. This is particularly helpful when I throw a shirt over his bed in the passenger seat of my car, or when I close the top of his messenger bag when entering a store. (On occasion, he will get curious and peak out of the bag, but so far we haven’t gotten into trouble.) 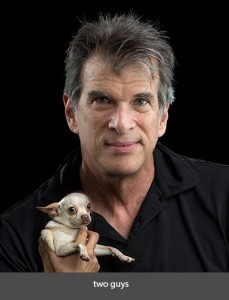 He also goes to work with me. (Actually, if I can get away with it, he goes everywhere with me.) When we get to the studio he says hi to his friends, asks for a treat from a few loyalists, then runs up his carpeted doggie stairs to his Martha Stewart bed, which awaits him on my desk alongside the keyboard.

During the day, when I look over and see him contently sleeping, a quiet calm passes over me and I can’t help but smile inside. 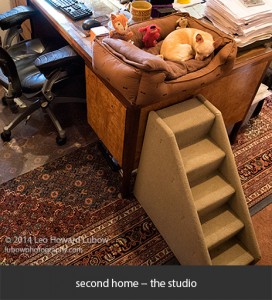 With Archie, it’s even better.

To see more of Leo’s work – not to mention – all the outtakes from the campaign, visit http://lubowphotography.com .