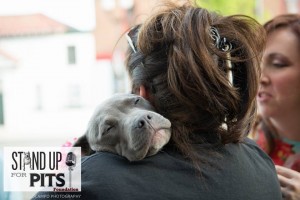 This is just one of the many memorable sentiments displayed on signs that appeared on the west lawn of the U.S. Capitol this past Saturday, when Pit Bull owners from all over the country came together for the One Million Pibble March on Washington to protest breed-specific legislation.

Angel, a gentle velvet hippo of a Pit Bull, along with her assistant, translator and guardian, comedian Rebecca Corry, inspired a nation of Pibble lovers to join forces and speak out as one against abuse and discrimination. 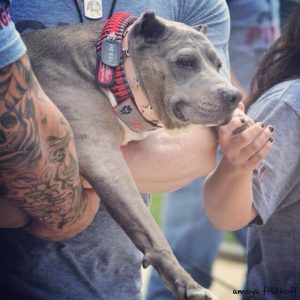 The sun shown warmly down on the crowd, made up of like-minded people of all shapes, sizes, colors and cultures. A bubble of love, hope, and relentless determination seemed to envelop this group of allies as they stood together for what is right and just.

It was a beautiful day to tell our nation’s capital that pit bulls are born inherently good, and that BSL is not okay.

Emcee Chris Williams got the party started with some good, old-fashioned cheering. The crowd, which was in the thousands, responded emphatically.

“When I say pibble you say love!”

As the crowd was cheering, I noticed that some sightseers in front of the capitol stopped to watch and listen. A few even stayed for the whole rally. It was heartening.

Williams then introduced the woman at the center of this historic event, Rebecca Corry, and the crowd erupted. The tiny woman with the big voice came on stage pissed yet humbled, aggressive yet compassionate, frustrated yet grateful (feelings we have all experienced in animal rescue); she’s an in-your-face force who uses truth, humor and love to inspire, and she won’t back down. 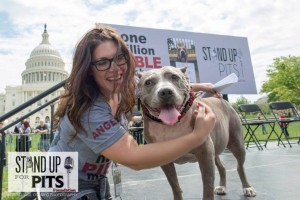 “Today we are sending a message to legislators on federal, state, and local levels that killing and banning the victim is not, and never will be okay, or the answer.”

Corry spoke candidly about ignorance, media misrepresentation, apathy, and the common denominator within the animal abuse and discrimination plague: humans.

“There is nothing more dangerous than a hate-filled human being.”

She urged everyone in attendance not to engage in conflicts with people who are anti-pit bull and won’t listen to reason. It was a reminder to focus our efforts in the positive direction, and used her beloved Angel as an example.

Angel had acid dumped down her back, hear ears cut off with scissors, and even had cancer, but this isn’t what people focus on when they meet her. People are uplifted upon meeting Angel, who has been described as calm and zen-like. They fall in love with her big eyes and smile at her rotund hippo body (which, in my opinion, she has earned every pound of and then some – so you go ahead, girl).

“She literally changes lives just by being alive.”

I’d like to note that I’m a fairly prepared event attendee – sunglasses, sunscreen, snacks, water, ibuprofen, hand sanitizer – I had all of the items for a day spent standing outside, but there is one I did not think to bring and should have: tissues. 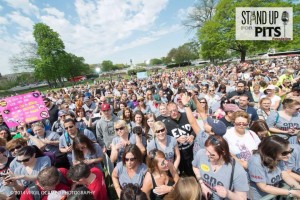 The passion behind every word spoken was tangible, and the stories shared made hearts swell like they could burst at any moment. When Leah Brewer told us how a child in Elle’s reading program (Tail Wagging Tales) was afraid to read in class, but felt brave reading to Elle, my eyes welled up. Elle has given children confidence and seniors something to look forward to. She was also named the 2013 Hero Dog of the Year by the American Humane Society!

When Stephanie Doris shared Nana’s resilience after years of unimaginable abuse and then subsequent illnesses and surgeries, I looked around and saw many wiping tears from underneath their sunglasses. “For Nana, life began at 9,” Stephanie said. ”She wears her scars with pride and has refused to let her sad past limit her bright, beautiful future.”

When Officer Kelly Steinhorn recalled her first encounter with Pretzel, who had been stabbed repeatedly and had her throat slashed, but was still “damn friendly and trying to lick everyone,” I could hear sniffles through appreciative laughter. “This is proof that pit bulls are born inherently GOOD!” Kelly shouted. 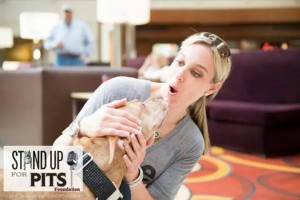 It was obvious – people were affected to their core; truly moved, inspired and hopeful.

These stories were not shared to conjure up sadness at this plight; there’s already plenty of that. They were to show that there is indeed hope, no matter how dire the circumstances might seem. That the hard work, sacrifices and tough fights are worth it, and we have to keep fighting harder and harder.

Roo Yori showed us that patience and taking the high road with skeptics pays off in the end. His Pibble, Wallace, went from making people nervous simply because of how he looked, to making people smile as they watched him became a champion Frisbee dog. “You can’t reach everybody instantly, and even if someone doesn’t have a good experience with a dog, make sure they have a good experience with the owner.”

Jamie Buehrle shared her family’s struggle and eventual sacrifice when her husband Mark became a Toronto Blue Jay. Toronto has a city-wide ban on Pit Bulls, but the family could not imagine leaving their Slater behind. Despite criticism from some, Jamie stood strongly by her decision to live separately from her husband during baseball season because it was the right thing to do, and is a valuable lesson for her children that discrimination of any kind is not okay. 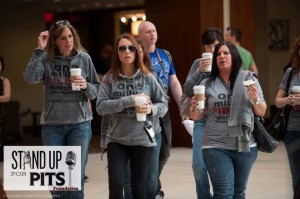 Speaking of fighting, John Rallo took a break from carrying Queen Angel around to remind everyone to stand up for themselves, make their voices heard, and be relentless about it. He would know; he just helped to overturn the Tracey vs. Solesky ruling in Maryland – an unacceptable example of legislation that embraced BSL and strict liability. “BSL is essentially racism in dog form,” he said. “Believe me, if enough people call and keep the pressure on politicians you can effect change. We did it in Maryland and there is no reason you cannot do the same in your hometown.” 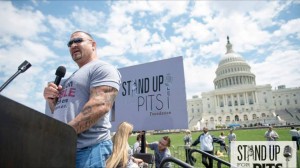 What really drove the point home was the Kids and Pibbles video shown on a large screen on stage. Hearing children speak of kindness and equality in a manner that was honest and innocent really struck a chord. It was a simple truth: we love our pibbles, our pibbles love us, and hurting them is not okay. This is simple truth that has become convoluted, complicated, and wrought with politics, misinformation, ignorance and lies. The keynote speakers wanted to share their stories so that we, as a collective society, can begin to get back to this simple truth.

What’s the best way to achieve this? Education. Educate yourself, spread awareness, be an advocate, make your voices heard, then get up and do it all over again. Our voices have to be heard above the clamor of negativity, indifference, and BS, so that every Pibble has a fair shot at the happy life they deserve. There’s a long way to go, but thanks to Rebecca Corry and Angel, we have a solid platform and one hell of an army.

Written by SYSS Special Correspondent, Carly McGee, who had the pleasure of meeting Rebecca personally and giving Angel a headrub and smooch. (And thank you to Virgil Ocampo for allowing us to share some of his photos from that memorable day.) 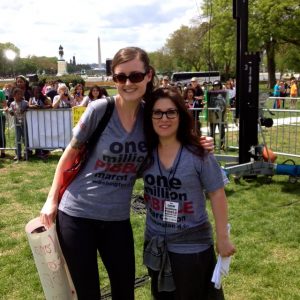