We all have a love/hate relationship with social media, but it has made the world smaller for people and better for animals.  In fact, animals may just be benefiting more than any other sector in the non-profit world.

Take, for example, Lainey Charter, a Canadian graphic artist who helps several animal organizations in Ottowa, where she lives, as well as shelter animals in Grand Bahama, more than 1,000 miles away. 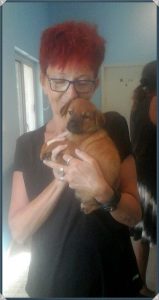 Her trip to that island as a teenager never left her, and decades later, out of curiosity, she began following the Facebook page of the Humane Society of Grand Bahama. When Lainey saw that the shelter was competing for a grant for much needed Kuranda beds, she reached out and packed her bags for Grand Bahama two years later, not to relax and bask in the sun, but to work.

The shelter welcomed her with open arms and was grateful for her help, as it was surveying the number of animals needing sterilization.  Lainey trekked in the hot sun with a large group and witnessed a staggering need for spay/neuter services.  The following year, she returned to help the shelter prepare for a mega spay/neuter clinic, that worked with U.S. veterinarians who volunteered to perform surgeries in makeshift operating rooms erected under tarps.  The clinic was an enormous success and Lainey was hooked.

She returned a third time and focused on humane education, as many children were terrified of dogs.  There was a pregnant pause when she asked a group of primary students what was inside a dog, and then to her dismay, a young boy replied, “Nothing.”  Her path became clear – she could make simple, clear, and bright illustrations that showed that animals are not so different from us — they get hungry and thirsty, have feelings, and can be afraid. 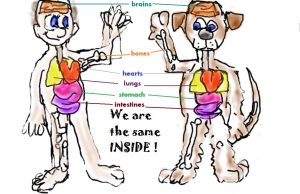 Though not a teacher herself, Lainey grasped that children are often visual learners and she combed the internet for resources.   She came across our campaign, which immediately resonated with her, and we shipped her posters and postcards.  In one of our favorite photos of all time, Lainey made us appreciate that our campaign can – and should be – a global one.  It did not matter one wit that her students did not know these American athletes, as the Softies’ message of compassion toward animals is universal. 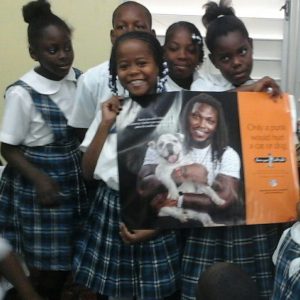 While the Humane Society of Grand Bahama is an exceptionally well-run shelter with a dedicated and caring staff, island shelters often face even greater challenges than most.  The island was dealt a severe blow in 2016 with the onslaught of Hurricane Matthew, which arrived on the heels of two smaller hurricanes.  Fences throughout the island were destroyed and countless family dogs were discovered either drowned or roaming-at-large.  Shelter fencing was also damaged, which imposed even greater burdens on shelter staff and volunteers, who were walking 160 dogs twice daily with nylon leashes.  Over time, poverty and dog fighting rose, as did the number of surrenders to the shelter.  While Lainey continued to focus on humane education throughout her many trips to the island, she recently sought out resources to help the shelter with these additional problems.  After reading how The Love Leads Project has been saving dogs throughout the United States, by giving slip leashes crafted from discarded climbing rope to police and first responders, she contacted Softie April Doherty, and “what happened next is what gives you hope for mankind,” says Lainey. 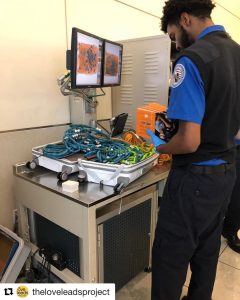 April packed a suitcase brimming with Love Leads and travelled to Grand Bahama to meet Lainey, who herself shipped an enormous suitcase crammed with donated veterinary supplies – sutures, syringes, and medications, including 50 boxes of recently expired heartworm medication from two Canadian veterinary hospitals. 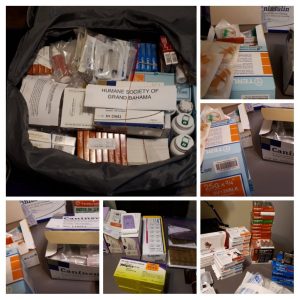 Lainey and April joined forces in October and April spoke to children from Earthcare Eco Kids about the proper treatment of animals and conducted an animal cruelty training for animal control and police officers.  She credits the shelter’s Executive Director, Tip Burrows, for taking animal crimes seriously. 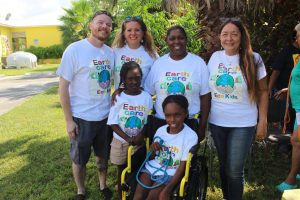 While we as Americans like to think we do things best, April is quick to point out that, “the U.S. needs to learn from Grand Bahama, as shelter dogs were segregated by size and cohabitated with each other.”  When a local resident dropped off a dog temporarily due to travel, the dog was actually excited and happy to be there.

Soft Side has expanded internationally in other ways as well.  This past year, we were honored to join the Humane Education Coalition, a global alliance of 103 partners in 26 countries.  And while our campaign remains targeted primarily to kids, our materials have also raised awareness with adults about the link to other violent crimes.  We gladly obliged when a U.S. air force base in Okinawa, Japan asked us to send posters for a domestic violence awareness event.

We are grateful to the many friends we have made here in Baltimore and around the globe, such as April Doherty and Lainey Charter, who help animals not only during this season of giving, but all year long.  They remind us that we are connected to each other — and to all living creatures — and that we can accomplish so much more when we work together. 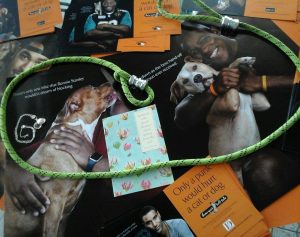 To donate to the Humane Society of Grand Bahama click here to visit their Facebook page. Veterinarians throughout the U.S. and Canada are urged to donate recently expired heartworm medication, especially Nexgard, which can be transported from Florida by ferry.