Ever since I can remember our family has had a special love for animals and it started with my Gram.  When I was a little girl, I would go to her house and the first one to greet me was always  Mitzy, a little black poodle who was not only the sweetest soul, but also one of the smartest.  Back then, my grandparents took dancing lessons and each week before the instructor arrived, Gram would say, “Go fetch my slippers.”  Mitzy was so small she could only carry one at a time.

Over the years, there were a parade of dogs and cats that came into Gram’s life.  Each of them lived large.  In fact, the vet used to tease her that her dogs didn’t know how to walk because she never let their feet touch the ground.  Her last dog was Maggie and among the many things they shared was a love of chicken wings. Gram and Maggie would sit on the couch, side-by-side, doing the “one for you, two for me” game, but I’m pretty sure Maggie was the winner each time.

More recently, Gram shared her home with two rescue kitties.  Waffles was her main man, a larger than life tabby who made his way out of a high kill shelter in New York to Western Maryland and finally to Owings Mills.  He had a hard scrapple background, neglected, starved and eventually so sick he ended up on a feeding tube.  Waffles was a survivor, but by the time he was ready to be adopted out, nobody wanted to take on an old guy. When we introduced Gram to Waffles, she said it was meant to be – two seniors spending their golden years together. 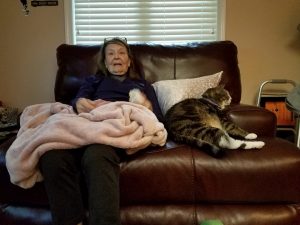 Waffles returned the favor by following her everywhere and spooning with her at night. He was quite protective of Gram – it’s the only explanation for why he’d always walk a few steps in front of her when she took the stairs as if to supervise each step and guarantee her safety.. 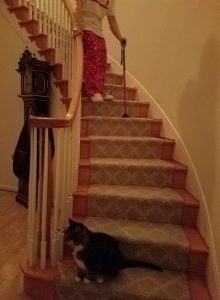 At one point, Gram learned that Waffles had had a pal at the shelter that was left behind.  She insisted on adopting that kitty, too and soon Waffles and Sophie were her world. Over the last few years, dementia started to take the Gram I knew, but it never dimmed her love for Waffles and Sophie.  Even so, every granddoggy and grandkitty that came to visit (she had 21 of them between my mother, my wife and me) was duly called….Waffles.  On one of my very last visits to her home, I brought our latest rescue pup, Beaker, along.  She begged me to let him stay and I promised I’d bring him over whenever she wanted. 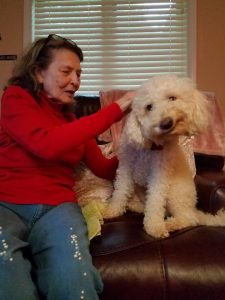 A few days later, Gram had a bad fall and broke her hip.  At 88 years old, surgery wasn’t an option so after a month in the hospital, she went to live with Ma.

For those who don’t know Ma, her nickname is Snow White.  She has a menagerie of wild life who love her dearly, along with four kitties and one dog.  It meant in spite of Gram no longer having her mobility and home, she would have no shortage of animals as friends and protectors. One of Ma’s cats took an instant shine to Gram. Her name is City Cat, but on top of Gram’s broken bones and dementia, her hearing wasn’t too sharp either. Gram thought we were saying “Kitty Cat” and no matter where you were in the house, you’d hear her calling “Kitty Cat, Kitty Cat, Kitty Cat. 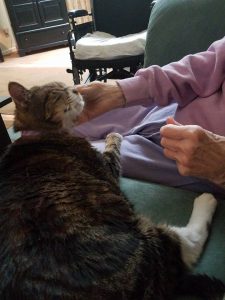 Hospice brought in a special bed and there was always a rotating assortment of cats cuddled at her feet and head.  Over the last three months, the cats and Ma’s dog, Lulu, grew to love Gram. Lulu is deathly afraid of thunder storms and often sought safety under Grams’ lift chair. Of course, Gram could never remember Lulu’s name so she just called her…Waffles.  It was a running joke that every hospice nurse and aide first had to get Lulu’s approval.  After a while, they all knew the score and would halt inside the foyer and say, “Lulu, get over here and sniff me down so I can take care of your Gram.” 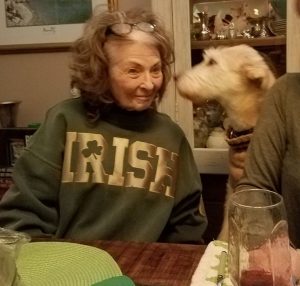 The final night of Gram’s life, I slept on the couch near her bed.  I could hear that her breathing was quite labored and was surprised to see Ma’s senior cat, Sophie, climb up on the bed.  She’s riddled with arthritis and rarely climbs anymore, but on this night, she snuggled up next to Gram and stayed there till morning.  Soon after, Gram went to the Rainbow Bridge to meet God.  I’m pretty sure that Mitzy, Maggie and all her other four-legged loves were there to welcome her home. 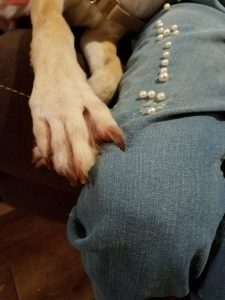 In honor of Gram’s love for animals, our family has asked that in lieu of flowers, a contribution be made to Show Your Soft Side.  It’s an organization near and dear to our hearts and it’s a decision that I believe has Gram smiling down from heaven right now.

Our hearts go out to the Davis and Smith family on the loss of their beloved Ida Ellsworth Olson known to everyone who was fortunate enough to cross her path as “Gram.”  And for those who are wondering, Waffles and Sophie have taken up residence with their nieces and nephews at Ma’s.

1 thought on “Honoring The Memory Of A True Softie”