Animal abuse can often seem like an epidemic in the United States, but the problems are far worse in other countries.  Despite the endless dogfighting, violence, and neglect, we, at least, have animal cruelty laws in each state, as well as first responders, veterinarians, shelters, advocates, and prosecutors who work to protect animals and hold abusers accountable.  The system is often imperfect, but our culture accepts that animals need — and deserve — our protection.

Not so in many countries around the globe.  Take, for example, Kuwait, where the animal protection movement is in its infancy and resources are scant.  As a flight attendant for United Airlines, Colombia native Patricia Riska, now a Baltimore resident, witnessed first-hand the horrific suffering that animals were enduring.  Some Kuwaitis adopt designer puppies and then abandon them when they are no longer novel, either in the desert, where the temperature can reach 120 degrees, or at the Friday Market, where they are sold.  These abandoned dogs are vulnerable to horrific abuse. 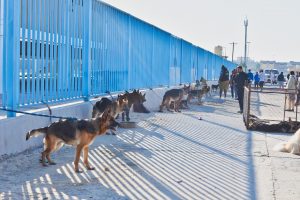 Wanting to help, a fellow flight attendant, who herself was saving stray cats in Kuwait, introduced Patricia to some of the local rescue organizations.  It was a defining moment for Patricia, who made it her life’s mission to help dogs that were abused, injured, or left to die.  In 2015, she founded “Wings of Love, Kuwait” with her partner Jennifer Yoon, and they and their board members have been traveling to Kuwait 8 – 12 times a year.  The organization spends approximately $1,500 to transport each dog, in addition to providing all veterinary care.

Their accomplishments are stunning.  In just three years, this small nonprofit has found homes for 341 dogs, a remarkable achievement for any rescue, but more so for one that must transport animals over a 6,000-mile journey and contend with regulations and customs officials in both Kuwait and the U.S. 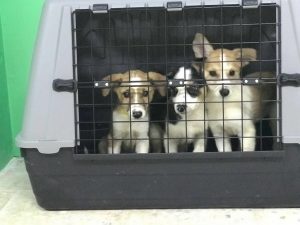 They have partnered with trusted rescuers and veterinarians in Kuwait, where the dogs receive needed medical care and recuperate in foster homes.  Before departing for the U.S., each dog is altered, vaccinated and microchipped, and upon arrival in Baltimore, Dr. John Trujilo of Light Street Animal Hospital, provides any ongoing care until each dog is adopted.  Not surprisingly, adoption fees cover a mere fraction of the cost spent on each dog. 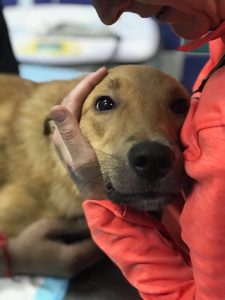 Fellow board member Deborah Bohan contacted us recently to see if we might collaborate on a project.  Deb works as a physician assistant in an intensive care unit and is a fan of BARCS Animal Shelter, where she adopted her blind Chihuahua, Chloe. 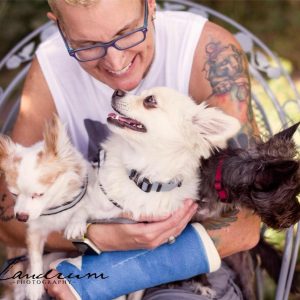 In addition to animal welfare, her passion is photography, and she has traveled abroad to tell stories with her images, including Haiti, where she documented the devastation after the 2010 earthquake.  Like us, she knows that a picture is worth a thousand words and offered to serve as the marketing director for Wings of Love, Kuwait.  She has since adopted her dogs Molly and Shannon from Kuwait, and is scheduled to make her third trip this calendar year to help a white Labrador named Prince, who is recovering from infected puncture wounds to his head and blunt force trauma to his kidneys. 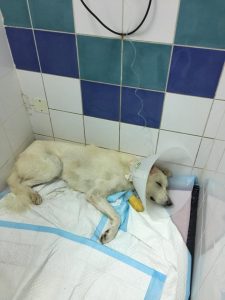 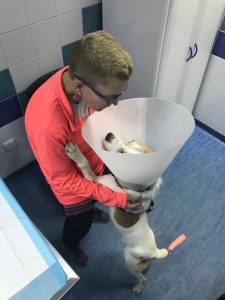 Like so many other abused dogs that the organization has rescued, Prince was found as a stray in the desert with his life-threatening injuries.  The suffering he endured is unimaginable.

The work is unrelenting, and we wondered how we could possibly help.  “We could spend the rest of our lives rescuing dogs from Kuwait, but it won’t make any difference, unless we do something for sustainability,” Deb told me.  “We think your campaign could serve as a model for an anti-cruelty and awareness campaign in Kuwait.  Would you be willing to share some printed materials with us?” she asked.  “Gladly,” we responded.  The campaign would look very different, Deb explained, as Kuwaitis have different role models than Americans, but she’s already discussed the idea with an American photojournalist who is living in Kuwait.

Sustainability – it’s a concept that has us thinking.  Resources everywhere are tight, but if our trademarked campaign can ignite a spark halfway around the globe, then we have succeeded in spreading our message of compassion in a way we never imagined. 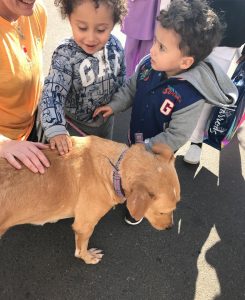 We have always sent posters and postcards worldwide free of charge to educators and first responders and we are likewise arming Deb Bohan with printed materials for her upcoming journey in March to Kuwait.  Stay tuned for real time updates on Prince’s recovery and rescue and our joint efforts to ignite an animal protection campaign in the Middle East.

For more information on the life-saving work of Wings of Love, Kuwait, please visit their website or Facebook page. (And if you live in Baltimore, keep an eye out for their adoptions days and you may just find the four-legged love of your life.)