During one game each season, NFL players across the league are invited to wear their hearts on their cleats.  The program is called My Cause My Cleats and for that one game, fans get to see the issues that their favorite players care most deeply about. (And in the spirit of full disclosure, we’ve had the incredible honor of appearing on Torrey Smith‘s cleats for the past two years.) 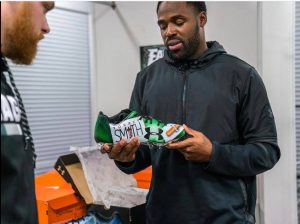 As you might imagine, during the week leading up to that game, we’re glued to our laptops seeing which player on which team is promoting adoption and/or speaking out against animal abuse.  This year, we weren’t the only ones watching.

The Jacksonville Jaguars organization immediately noticed that animal welfare and animal issues ranked high on the list of their players priorities.  That led them to reach out to the Pit Sisters, a Jacksonville rescue that’s gained a national reputation for saving abuse victims and for their success at using inmates to train shelter dogs and increase their chances at adoption.

The Jaguars asked, “Are there other ways that the guys could help with the efforts?”  The answer was uh….YESSSSSSSS and the idea for a Pit Sisters/Soft Side photo shoot was born.

However, this shoot was going to be unlike any we’d ever done before.  Instead of the players posing with their own pets, they’d ALL like to appear with survivors and/or adoptable rescue animals.  We immediately packed our bags and headed south.

What the Jaguars didn’t know was that visiting the Pit Sisters prison program had been on the top of our bucket list for years.  This would not only give us the opportunity to add some passionate new champions to our team, but finally see the Teaching Animals & Inmates Life Skills, a/k/a the TAILS Program, in action.

So on our first day in Jacksonville, we left our wallets, cell phones and everything else behind and entered one of the TAILS facilities to meet the inmates and their four-legged charges.  Some were pups that had been earmarked for the kill list at the local shelter, others had been rescued from dog fighting rings.  In fact, that’s when we learned that two of the dogs we met would be appearing in our shoot the next day.

As parents to kitties and Archie, our Assistant Photographer Chihuahua, our first thought was – is that going to be okay?

After all, one of these dogs lost both eyes to his abuse and the other had been held in isolation for two years in Canada awaiting the outcome of a judge.  How would these dogs fare with men they’d never met?  How would they react to the flash of lights?  How would they respond to all the activity and noise and new faces and smells?  Jen Deane, Executive Director of Pit Sisters assured us they’d be fine and went on to show us how Peanut, the Canadian survivor, loved to be held like a baby and Jackson, the pup with no eyes, just wanted to give kisses in return for belly rubs.

Knowing that Jen, along with Pit Sisters volunteers and Jim Crosby, internationally known dog behaviorist and trainer would be with us, that settled it.  We were ready for our Jaguars shoot. Except for one small hiccup.

The pups had all been chosen and booked when one of the players specifically requested that he be photographed with……..a kitty cat.  Although a longtime dog Dad, he and his fiancé had recently found an abandoned kitten that immediately wormed its way into their hearts.  He’d taken a lot of good-natured flak from teammates, but he was now an equal opportunity animal lover and wanted to use this chance to rep the world’s only purr machines.

Jen launched into action and was soon able to arrange 5 kittens, 1 dog fighting survivor, 2 abuse/neglect victims and one puppy found with a mangled leg that was slated for amputation later that week.

It was going to be quite an interesting shoot day. 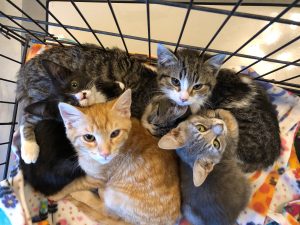 Peanut and Jackson arrived first, with the kittens bringing up the rear.  Next came Hazel, a five-month old puppy with the gimp leg, followed by Marroney – a still lactating pit bull who had lost all but two of her nine puppies due to emaciation and worms.  She was the only one who seemed timid and scared.  However, that changed the second she saw KITTENS! Putting her nose right up to the crate, she licked their furry little heads and her tail started to wag.  Hazel, the puppy, wandered over to see what all the licks were about and soon, Marroney was giving baths and cuddles to all of them. 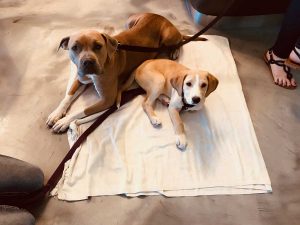 I can tell you, in all honesty, any fears we might have had were totally gone. 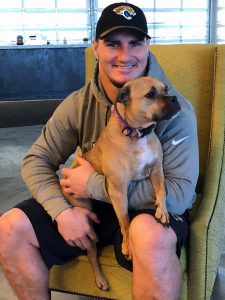 Tommy Bohanan and Ben Koyack were the first players to arrive and they didn’t waste any time dropping on the floor and loving on the dogs.  If you didn’t know any better, you’d have thought these were their pets and for a short while that day, they were. 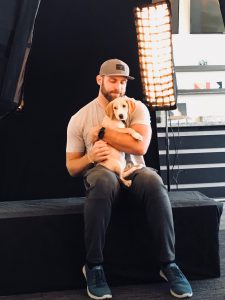 Next to arrive was our Cat Guy, AJ Cann, and after giving out some puppy head rubs, he headed to the “kitty corner.”

Jags fans already know, AJ is not a small guy. The only issue is that he’s so big, when he holds a kitten, you can hardly see its little head above his hand.  That was soon solved as Scarlett, one of our tiny puffballs, decided to climb up and sit on his shoulder.  What followed were a series of teensy head bonks and a little beard nuzzling.  Who knew that would prove to be the quickest way to AJ’s heart?

Our final model of the day was DJ Smoot. Another dyed-in-the-wool Softie from the word go. His shooting partner was Peanut, one of the Ottawa 21 who had been rescued from a fighting ring and then slated for death simply because she’s a pit bull.  If those who had advocated for her death could see her now, they’d eat their words.  Cradled in DJ’s arms like a baby, Peanut’s head lolled back with her tongue out like she’d just entered a state of total bliss. Any worries were long gone.  The two were cheek-to-cheek and loving every minute of it. 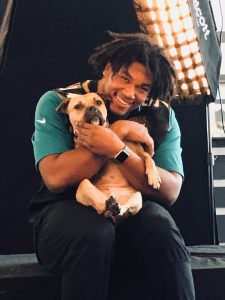 There are two things that will make this trip and this shoot one we’ll never forget.

For starters, this was four days before a do-or-die game with the Patriots, yet Tommy Bohanan, Ben Koyack, AJ Cann, DJ Smoot and the entire Jaguars organization set aside and made the time to show their support for rescue animals.  And two, these rescue animals don’t care if you’re an inmate or an NFL superstar – you show them kindness and they’ll love you just the same. 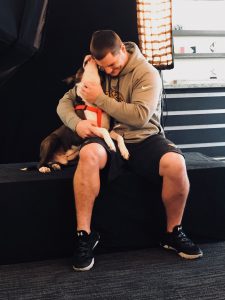 Click here and you can check out the Jaguars behind-the-scenes video. We hope you’ll stay tuned for the final poster unveiling, but in the meantime, you really should visit the Pit Sisters website and learn more about the TAILS Program.  And no matter where you call home, if you care about animals and the Softies that love them, you’ll be cheering for teal this weekend. #DTWD