April Doherty doesn’t have an off switch. As a personal trainer, she will kick your ass in the gym. As a paralegal in the Baltimore County State’s Attorney’s Office Felony Review Unit and Animal Abuse Unit, she will kick your ass via the legal system. A voice for the voiceless, an advocate for the victims, April, along with prosecutor Adam Lippe, work tirelessly to ensure that animal abusers pay for their crimes.

Animals have always been one of April’s great passions, and when she came to the State’s Attorney’s Office 10 years ago, she noticed a gaping disconnect between organizations that handle crime response and triage.

She explained: “Ten years ago the disconnect was WORSE because there was a lack of prosecution for the cases completely. People do not want to see the pictures, talk about the cases, etc. But regardless of how horrific the pictures were, the extra workload became a specialty. Attorneys sort of knew to come to me if they received cases, which wasn’t nearly as often as it is now. I was laughed at by defense attorneys, and Judges didn’t take our cases as seriously as they do now.”

There is a direct link to crimes of animal abuse and crimes against people, including but not limited to domestic violence, child abuse, sex crimes, violent crimes, juvenile crimes etc., and her goal is to yell it to the world — to create awareness and educate the public. She saw a great need for communication between entities like the police, animal control, the Domestic Violence Unit and even Social Services. She’s been working hard to be the facilitator between organizations and to provide each one with the resources they need. She’s essentially the switchboard that helps to make connections and therefore solve problems and miscommunications. For example, sometimes police officers would complain that Animal Control is ultimately responsible for cases involving animals. Conversely, Animal Control sometimes complains that police don’t show up quickly enough. The reality is that Animal Control is responsible for cases that are a matter of PUBLIC safety, and police are supposed to respond to cases that have to do with individual parties. It’s all about proper communication.

April and Adam both stress that if you see or even suspect an abuse situation, CALL THE POLICE! It is their job to respond to animal cruelty, and best to inform them as soon as possible rather than waiting and letting an animal suffer. You can also email MOC.LIAMGnull@ESUBALAMINASTHGIFOCAB if you need help or have questions.

It’s important to note that April and Adam aren’t paid any extra for their work in the self-created Animal Abuse Unit. Their salary is their salary, but they do these cases because they genuinely believe that fighting abuse is the right thing to do. 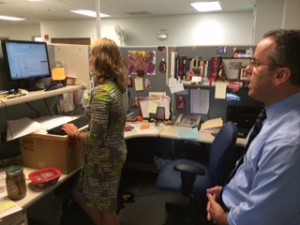 “I will give credit where credit is due,” said Adam – who has successfully gotten jail time for every abuser charged at the felony level that he has prosecuted. “April came to me with the idea and we went with it. It’s great because she is able to connect with victims on a different level than I can sometimes, especially if the victim is a woman involved in a domestic violence case.”

While I was hanging out with April in her cube – she’s one of those who chooses to stand at her desk for most of the day, and I say more power to her — I got to hear her speak to people involved in different cases. WOW. So much awful in such a short time. It wasn’t even noon yet and I had seen photos and heard stories that I wish so badly I could un-see and un-hear. Disturbing cases involving cats, dogs, a horse and even a bunny. This is the reality though, and it is NON-STOP. I’m pretty sure at one point she was talking on the phone, typing an email and talking to someone in the office at the same time. It was impressive, and made my brain want to explode. I’ve admitted before that I can be a crier sometimes, but I was caught off guard by something I read in one of the police reports I was privy to. In fact, I’m tearing up now as I write. I will spare you the details and offer the silver lining instead. The responding officer wrote a thorough, detailed report that painted a clear picture of the abysmal, heartbreaking conditions of the situation, along with the gentle demeanor of the animal that was still alive. Because of details like this, April can easily and accurately determine the appropriate charge and make sure the abuser gets the worst punishment within the parameters of the law. Fortunately, April has some reliable, go-to officers in the BCPD and she communicates with them constantly. Two of them have actually adopted dogs that they saved.

By lunchtime I had nearly lost my faith in humanity, and I wondered how on this great green Earth she does this every day and still walks around with a smile. “Some cases make me break down and cry, but I push through it because I am their voice,” April admitted.

I know that I would need therapy dealing with such horror every day, and as it turns out, April does have a therapist. His name is Beso. 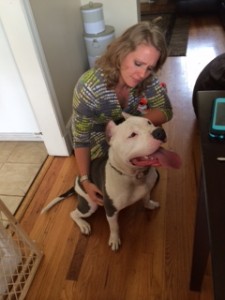 April and Beso have quite a history together. Beso is a spirited guy, and April was one of the very few volunteers at the shelter trusted to walk him. April saw his potential and they formed a special bond. After an emotional and political fight to pull him for foster, April won and Beso was finally free. Unfortunately, Beso wasn’t the best match with her family pets, and as every good foster parent knows, you need to do what is best for the foster animal. Beso’s story, while not at its happy ending yet, is still one of happy progress. You see, now he has three families who adore and care for him in foster (big shout out to Baltimore Bully Crew), helping him to be calm and work on manners. Fortunately for April’s sanity, Beso’s foster home is just down the street from her office. “Puppy kisses are what gets me through everything I deal with at work,” April said. “I come here multiple times per week. It wouldn’t be a complete story if I didn’t show you this part too.” A lunch of Chipotle and Beso-love to add to the blog entry? Twist my arm.

Back at the office with a renewed sense of warm fuzzies and a reminder of what happens when you fight through the painful stuff for the sake of the innocent, I got a chance to speak with Scott Shellenberger, the State’s Attorney of Baltimore County. “This initiative began with someone (April) who saw a need for change and decided to try to fix it. They came to me and I approved Adam and April to take time to take each case properly and thoroughly. Animal abuse is in the news constantly and it gets more of a reaction than a story of a person being abused. Neither is a good thing, but it really helps bring awareness to the cause.” 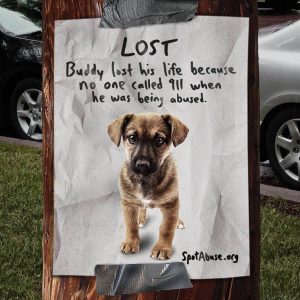 When asked if he had any personal stories involving animals, Shellenberger recounted, “I had a yellow Lab who was the original Marley (bad dog from the movie). She had diabetes for 7 of her 13 years and I gave her insulin twice a day. I cried like a baby when that dog died and I haven’t gotten another one since.” As you might expect, we all responded immediately that we could find him another lovely dog, and getting another one really does help once the time is right. We’ll see how that goes.

After my chat with States Attorney Shellenberger, I had a chance to catch up with Adam, who is also quite the multi-tasker. Adam is totally approachable, friendly and sarcastic funny outside of the courtroom, but when it’s time to get down to business he doesn’t play. He is whip smart; always having a response or question for everything, down to the little details. He’s unwavering in his replies and doesn’t back down. I would NOT like to be the defendant in one of Adam’s cases. He explained that when he prosecutes a case, he asks himself, “What if I was watching Stone Phillips give a report — how smooth would it go and what would I want to see?”

I know I’ve given you a lot so far but stay with me here. Really read this part and think of it if you are ever in a similar situation. Adam talked about the importance of taking action, even if you think no one is around:

“Imagine you are outside of an apartment complex and you see a person or animal get nearly beaten to death. You pretend not to see it for whatever reason and keep walking. You did not realize a child was watching from a window and he saw the whole thing. How would you explain to that child that your actions (or lack thereof) were okay? If you see something, imagine that a child is somewhere to see your reaction. If you do nothing, you are only teaching that child that violence and indifference are acceptable.”

He explained that about 90% of animal abuse cases involve people who abuse their own animals, so the abusers obviously aren’t going to complain about their own situation. Adam and April rely so heavily on neighbors, witnesses and police officers for case evidence, so if you see something, don’t ignore it and assume someone else will help.

“I encourage advocates to come out and see a case for themselves. Take charge of their advocacy. I work for and am a member of this community, and I am transparent as possible when it comes to how each case is handled.” 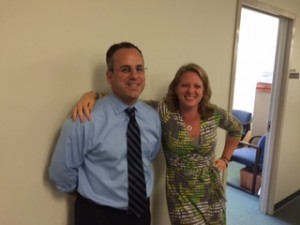 April and Adam are not going to stop fighting for the voiceless and trying to make positive changes. It’s so easy to complain about the bad things, but consider taking Adam up on his offer of watching a case and you’ll see for yourself how hard they work and how much they care. Baltimore County has gone to bat and they are winning. Who’s next?

Just in case you missed it, you can email MOC.LIAMGnull@ESUBALAMINASTHGIFOCAB for answers, help, and advice. Pass it on.