I’ve seen the posts a few gazillion times.  “Can anybody transport a dog from here to there?”  “Who can pick up a kitty at such and such an address?”  I’ve seen them, I’ve even shared them, but it wasn’t until this past week, I had any clue about the breadth and depth of the Rescue Railroad.

It all started when I got a call from Softie, Gerrard Sheppard. For those who don’t know him (your loss, people) he’s a Towson football stand-out, former Ravens, former Green Bay Packer, owner and founder of Sunset Raw Juice Bar in Owings Mills, and one of the most genuine, big-hearted Softies you’ll ever meet.  He’s also a crowd favorite at Pawject Runway, but missed this past one since it fell on his wedding day. “Kristen and I have decided we’d like to adopt a little sister for Ace. Can you suggest a good rescue?”

I hadn’t even hung up the phone before I started reaching out, but he had one stipulation that could prove to be an issue.  After consulting with his vet and reading everything he could get his hands on, Gerrard intended to wait six months before spaying Ace’s new little sister.  That could prove to be a deal breaker for many shelters and rescues. Most insist an animal be fixed before being released to its new home.

I was debating how to serve it up when my inbox started dinging.  Jen Deane from Pit Sisters had just taken in two litters of pit bull puppies (and their Moms) as part of an animal cruelty seizure and the photos were adorable. The only problem? The puppies were in Jacksonville and Gerrard & Kristen were in Baltimore.

It didn’t take long for the Sheppard’s to fall in love and within 48 hours, the adoption was a done deal.  The lucky winner was a little gray & white wiggly butt who looked like a miniature, female version of Ace. 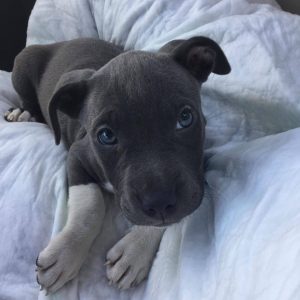 Now came the biggest hurdle of all.  How were we going to get the puppy from Jacksonville 746 miles north to Baltimore?  Jen had access to a few volunteer pilots, but they agreed to flights when there were multiple animals and/or emergencies involved.  This was just one teensy puppy who just needed a lift up north.

That’s when it hit me – we had a resource right in our own backyard.  Her name is Marie Hallock-Sweet and in between a fulltime job, volunteering at BARCS, staffing Soft Side events, and fostering in her spare time, she also organizes rescue transports. “Marie, any chance you’d take this on?”   (Silly question, I’ve yet to ever hear Marie utter the word, “No.”)

And so began my entry into a world that I never even knew existed – the Rescue Railroad.

From the outside looking in, it felt like an undertaking not unlike the Normandy Invasion, minus the amphibious vehicles and armaments. (Although given the endless rain this summer, the former could have come in handy.) First, the route had to be plotted into separate legs, each approximately one to two hours long.  Rendezvous spots had to be determined and potty breaks built-in.  Once the mapping was complete, a call went out for volunteers, and then everyone who raised their hand had to be vetted and checked.

It’s a logistical Rubik’s Cube that takes a patient (and organized) person to crack.   This particular trip involved 10 different legs and 12 different drivers.  Coordinating all the while with updates from Jen at Pit Sisters about food, puppy pads, and medical reports.  (It’s also important to point out here, everyone involved is a volunteer.  No one gets paid and no one gets their expenses, gas or mileage covered.)

Bright and early on a miserable, gray, rainy Saturday up and down the east coast, the journey began. Each driver would report in with photos and videos and status updates. Suffice it to say, there was a whole lot of cuddling going on. As Marie said to me on day one, “No worries, this one will be a piece of cake.  Everybody is in need of some puppy breath.”

The last leg would be handled by Marie herself, along with another Soft Side colleague, Meg Alexander. Together, they brought the puppy home to Marie’s house for a few hours’ sleep before the final hand-off the next morning.

Overnight, a new problem reared its ugly head.  Torrential downpours.  Gerrard and his family were scheduled to meet Marie & Meg at a local dog park.  The reason being, Ace had yet to meet his little sister and everyone suggested that should take place at a neutral location.  At this point, the group would have needed an Ark to pull that one off.

That’s when Soft Side board member, Robin Boyle, dove in.  She started calling all the local hotels to ask if the reunion could take place in their lobby. Only one, the Hyatt in Owings Mills said, “Absolutely. We’d love to.”

At 9:30 am on a miserable, pouring wet Sunday – Gerrard and Kristen met their newest family member, Zoey, a happy-go-lucky survivor and Pit Sisters alumni who just won the grand prize in the adoption Lotto.

Her new Auntie Shanae and Grandmom Showanda came bearing pink balloons in her honor and there was some serious cuddling and kissing going on.

One of my biggest regrets is that I wasn’t there to personally see it, but the photos say it all.

Ace took an immediate shine to his little sister and the feeling was mutual.

In fact, just yesterday, I received an email from Gerrard, “Ace is beyond happy, he’s currently chasing Zoey around the house as I type. Thank you for helping to make our dream come true.”

It’s no cliché that rescues like Pit Sisters save lives, but the Rescue Railroad provides the means to change them.  It expands the adoption field from one small area to cities and countries across the country and, in this case, to a family that will love, cherish and adore Zoey forever.

Thank you Jennifer Deane, Marie Hallock-Sweet, Megan Alexander, Cheryl Turcotte, Debra Padgett, Michele Lee, Dennis & Sue Card, Melissa Demars, Jay Dawn, Brigitta & Bob Cunningham , Julie Page and Robin Boyle for coming together in such a selfless, beautiful way to give Zoey the kind of life we wish all animals could experience.  And thank you Sid Keiser for being there so we could live vicariously through the photos.