Like so many of our introductions these days, this one came via a Facebook message.  It was from a licensed veterinary technician who also happened to be a hobby photographer and wondered if there was any place in the campaign for a photo she’d taken of her son and their foster dog?  I ran down all the reasons in my head why it wouldn’t work, but decided to skip ahead and just ask if I could see it.

When I did, I was blown away. 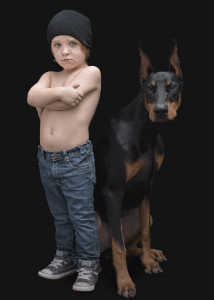 The photograph was beautiful – too beautiful, in fact, to simply respond “love it, but it won’t work for a variety of reasons” so instead picked up the phone and couldn’t be more grateful that I did.

My chat with Kimberly Pow gave me a peek inside a world few of us will ever know –  the heartbreak, the joy and the extracurricular baggage that comes from working in the veterinary field.

Kimberly’s career path came via a rather circuitous route.  She was working in the medical field when someone mentioned an acquaintance who refused to get her cat spayed and now kittens were overtaking the neighborhood.  A longtime sucker for anything that purrs, Kimberly decided to trap and get the growing family spayed and neutered on her own. It was during one of her increasingly regular trips to her vet’s office that she noticed a job posting.  On the down side, it would mean a serious cut in pay, but on the plus side – her TNR expenses would be covered and she’d be working in a field that truly touched her heart.

That was six years and countless dogs, cats, a starling and one hedgehog ago.

You see, what I never realized on all those trips to take our own boys for vaccinations, sick visits, dental surgery and mishaps is that not everyone views their vet as a family doctor.   Unfortunately, there are those who think it’s a place to drop off something that’s sick, wounded or found. And you know where many of those animals end up?  Well, if it’s Manchester Vet Services with everyday Softies like Kimberly, it means those animals are now being loved in various staff members’ homes.

That’s exactly how Pecky Becky, a wild, bald starling with a serious case of attitude ended up with the last name Pow. “Somebody brought her to our office to be euthanized because starlings are pack birds so can’t be released on their own and wildlife refuges won’t take them.   I thought if she’s going to die, at least she should know love for a few days so I brought her home.” 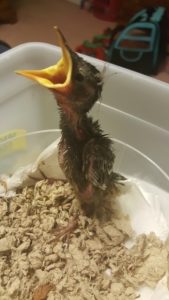 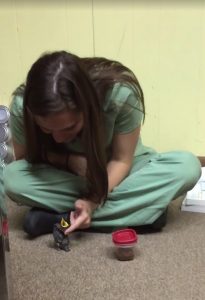 That was six months ago and Pecky Becky is still going strong. She has free run of the house and can often be spotted perched on one of their dog or cat’s heads.  The only exception being at dinnertime when she’s caged for a birdy timeout due to her love of dive bombing plates. 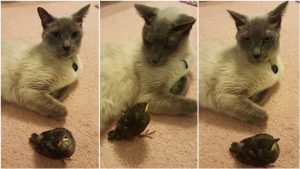 Three of Kimberly’s nine cats also arrived via the vet’s office.  The others compliments of her sideline, i.e., fostering for Saving Grace Animal Rescue.  “These are cats that nobody will adopt because of their various medical issues.  Kidney failure, bladder crystals and one whose sternum was born outside her chest.  Our house has become a hospital ward for the unwanted, but I can assure you, they’re wanted here.” 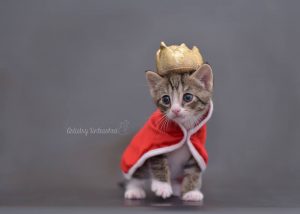 With three kids in addition to the four-legged menagerie, everyone pitches in. “My oldest son started bottle feeding babies at four- years-old and both he, his brother and his Dad all do it now.”  That extra help comes in handy when you’re the go-to foster for Saving Grace’s medical cases and pregnant pups.  In fact, just 24 hours before we spoke, Kimberly’s foster dog, Gina, had gone into labor and in spite of being a petite little dachshund ultimately given birth to seven roly poly behemoths.  Unfortunately, two didn’t make it. “She delivered the first two and then nothing so last night after our office closed, the entire staff stayed on to do a C-section.  We didn’t leave till almost midnight, but the patient’s doing well.” 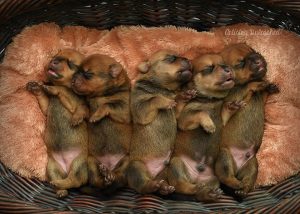 Gina, the pup in question, was pulled from a shelter in North Carolina and arrived so terrified of people that she crouched and belly crawled at the sight of them.  “She’s slowly starting to come around.  I force her to cuddle with me every night and this week for the first time, she actually wagged her little tail.”

If you’ve been keeping track, you’ll know we’ve mentioned one starling, nine kitties, one new momma and five puppies in the Pow household, but there’s still one we haven’t touched on yet.  His name is Quilliam C. Urchin and he’s a hedgehog that’s madly in love with his five-year-old human brother. 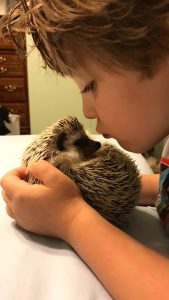 “Those two are inseparable.  As soon as my son gets home from school, Quilliam comes out of his enclosure and travels in Elias’ pocket.  He even takes baths with him at night.”  Yes, you heard correctly, a hedgehog that happily coexists with his kitty siblings, cuddles with his human brother and enjoys a nightly swim.

And if you need proof, a lot of these moments are memorialized on Kimberly’s photography page, Artistry Unleashed because lest you forget, photography is where this all started.  In fact, I realized later, I’d seen her work.  Most notably when she announced the birth of foster kittens with a full-on, maternity photo shoot. 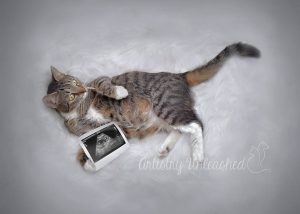 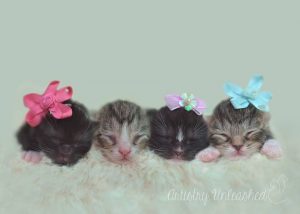 We’ve often said that Soft Side has introduced us to a world we never knew.  A world filled with kind-hearted people doing amazing things quietly and without any fanfare.  Certainly, Kimberly Pow ranks a place at the top of that list.  While I, for one, am barely managing a (now) one pet household, she’s bringing up a new generation of Little Softies and saving animals left and right.  That secret life has also resulted in her developing a healthy sense of humor as evidenced when our phone chat suddenly got cut short.

“Uh oh, I’ve got to go.  My three-year-old daughter is like the cartoon character, Elmira, and she’s currently putting a bottle in the dog’s mouth.  Thank God he’s so patient.”

Postscript:  Kimberly and Saving Grace can’t do it alone.  To adopt and/or support their rescue work, visit the Saving Grace website and Facebook page.