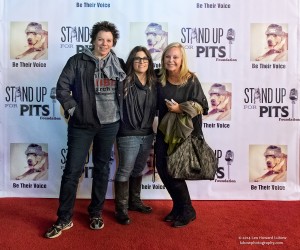 The word came via a text from Rebecca Corry – “Kaley Cuoco wants to be a Softie.” Shut up. THE Kaley Cucoco?   As in America’s sweetheart, star of The Big Bang Theory, recently inducted into Hollywood’s Walk of Fame and high profile “mom” to three rescue pups? THAT Kaley Cuoco? The answer came back, “Yep, and her husband, tennis pro, Ryan Sweeting, is in, too.”

Within minutes, I was checking flights to L.A. for myself, photographer Leo Howard Lubow and fellow SYSS board member, Lori Smyth.   (This would be a good time to mention, when we travel for out of town shoots, all costs come directly out of our own pockets. We made a decision early on that donations would be used to promote the message, not to underwrite our travel expenses. That said, an opportunity like this only comes along once, so to hell with mortgages and credit card bills. Lucy, Ethel and Ricky were going to Hollywood!)

I have to admit, it was a bonus when we discovered the agreed-upon shoot date put us smack in the middle of West Hollywood’s Halloween parade. (Think Mardi Gras meets The Adventures of Priscilla, Queen of the Desert.) Truly, there is no better tonic for a five or six hour (who’s counting) plane ride than meeting Chihuahuas in firefly costumes and Pit Bulls in tutus, not to mention Bagel, The Sunglasses Cat. 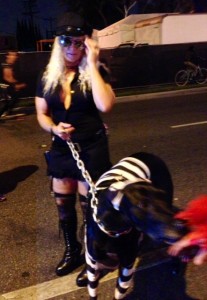 One thing’s for sure, Hollywood loves its pets. That was borne out every time we walked down the street, sat at an outdoor café, or wandered in a shop – four-legged furballs were welcomed almost everywhere.

After a partial night’s sleep (did we mention that West Hollywood Halloween festivities go on till the wee hours?), we transformed the hotel boardroom into a photo studio and awaited the arrival of actress and comedian – Rebecca Corry.

Earlier this year, Rebecca became our first-ever female Softie, so we used the excuse of getting “updated shots” in order to snag some one-on-one time with her beautiful, four-legged Angel. This is a pup that was tortured, beaten, and burned with battery acid and yet has nothing but love, tail wags and wet kisses for everyone she meets. She’s also the only pup we’ve ever met who has a serious thing for hotels – she approved of ours and with the promise of chicken nuggets (the pup variety), Angel took her place in front of the camera like a pro. 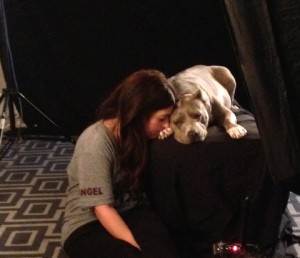 What followed was a front row seat to a very special relationship between animal and human that personifies everything our campaign is about.   Rebecca may be famous for her sometimes off-color humor, but with Angel she’s as soft as they come. In fact, the toughest part of the shoot was convincing Rebecca that she needed to look at the camera instead of nuzzling and loving on Angel.   (If you’ve ever met Angel, you’d understand why that isn’t so easy.) Our shoot was less than 24 hours before Rebecca’s sold-out Stand Up For Pits event at the Hollywood Improv so an hour later, we had to let them both go. 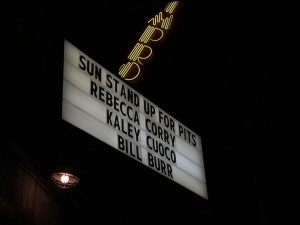 Now the wait was on for our shoot with Kaley and her husband, Ryan. Everything had been tightly scheduled down to the minute. We were to arrive at their house promptly at 3:30. At 4:40, we would have Ryan for twenty minutes, followed by Kaley at 5pm. At 5:20 sharp, Kaley needed to be in a car headed to the red carpet at the Stand Up for Pits Event.

To put this in perspective, you have to understand that for two of us – even when we’re late, we’re early. Our third is a bit less paranoid about the clock. Therefore, the evening before the shoot was spent debating how many hours in advance we should load up and head out. Given the reputation of LA traffic, and knowing it could take 40 minutes to get there, we finally agreed on a departure time. We also agreed that if we were early, we’d ring the bell and explain it took less time than we thought, but would be happy to wait outside.

Those plans quickly went to hell the next morning when we met a celebrity relations & entertainment marketing person from a very well known national organization for brunch. She very patiently explained that, in Hollywood, on time was too late and anything more than five minutes early was too early.

That launched us firmly into Plan B. Leave the hotel two hours early and find somewhere to cool our heels once we were in the vicinity. Sure enough – Murphy’s Law – we were there no time at all so we decided to do a quick drive-by reconnaissance. At the exact point the GPS said to turn was a massive iron gate so we drove back down the hill, parked on the side of the road and started watching the clock.

We synchronized watches, compared them to our iPhones and killed time observing a woman parked across the street plucking her eyebrows. (It must be a Hollywood thing since she did this before getting out and heading off for a hike.) At exactly 3:10, we got back in the car and made our way to the gate. This time, however, it was wide open so we drove inside only to realize the homes were behind additional gates and nowhere were house numbers evident. At least one of us (okay, it was me) was convinced we’d soon be surrounded by a SWAT team and questioned as to why we were casing the neighborhood in our cheap SUV rental. Finally, by process of elimination, we determined which gate it had to be. 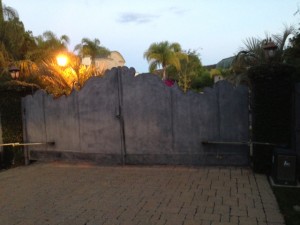 I get out, push the buzzer and a voice that millions would recognize cheerfully said, “hello.”   Stuttering, I answer, “This is Sande from Show Your Soft Side – we’re here for a photo shoot.” The voice said, “Oh yeah, hi, come on in” and the gate magically opened.   We unload the equipment and wheel it to the door, but before we even had a chance to ring the bell – it opened and there was a smiling Kaley Cuoco. No make up, bare feet, and the cutest little scruffy white dog at her heels.

You would have thought we were all old pals, not a bunch of strangers invading her house with trolleys full of camera equipment and lights. She introduced us to Ruby, the little pup at her heels, and then gave us a tour of possible shooting locations. By this time, her husband Ryan arrived to say hello, along with Norman and Shirley, their two rescue pit bulls. Within minutes, the doorbell rang again and this time, another Ryan (hereafter referred to as Ryan #2) and Tony, their pups’ trainers and pet-sitters arrived. 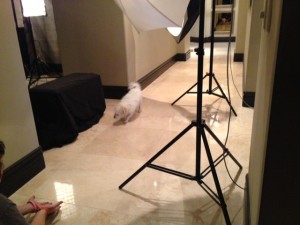 I don’t know what I expected, but I didn’t expect it to feel quite so welcoming and natural. In between hair and make-up that was happening in the kitchen, Kaley would periodically run in to see if we had everything we needed. Ryan searched out chairs big enough to comfortably hold Norman’s wiggly butt and Ryan #2 kept Shirley distracted so we wouldn’t be licked to death.

Once the lighting was right, Ryan and Shirley took center stage – and like any good wife, Kaley came in to cheer them on. 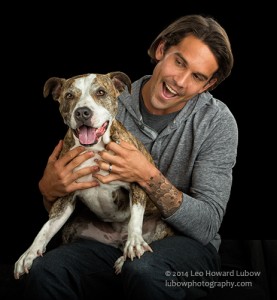 The audience soon consisted of us, Ryan #2 along with Kaley’s make-up artist (if you live in Baltimore, you know her brother, Lowell Melser, from WBAL-TV) and her hair stylist – all very obviously animal lovers since together, we formed a chorus of oohs and aahs. And if you think Kaley is lovable on The Big Bang Theory, that ain’t nothing compared to how she is with her furbabies.   At one point, Ruby – the most recent addition and the little scruffy timid one who greeted us as we arrived – became downright giddy when her mom was on set. Kaley danced and sang while Ruby did two-legged twirls to keep up.

Next up was Kaley’s turn with Norman, the guy she confesses is the love of her life. 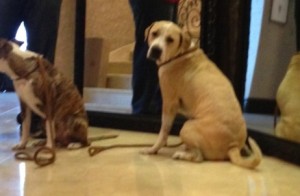 Adopted eight years ago from a high kill shelter, Norman was diagnosed with cancer and only given a few months to live. That was almost a year ago. Today, you wouldn’t know he was anything but healthy and happy, and definitely loved cuddling with his mom. That said, Leo, our photographer, was warned NOT to make growling sounds to get his attention. It seems Norman has a strong protective instinct about the lady in his life. 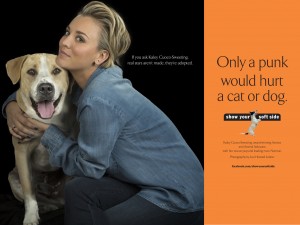 To see Kaley in front of a camera makes you understand why she’s in such demand. There is no such thing as a bad photo of her and with her furbabies – both she and they come alive.   We only had a limited time with Kaley, but a few minutes was all it took—a few very special minutes to capture the bond between her and her animals, and for all of us to realize we had just witnessed the real thing.

We’d like to thank Tony and Ryan #2 from The Pet Handler for their help with the shoot, the staff at Healthy Spot for the best squeaky toys ever and most importantly, Rebecca Corry, for her incredible support of SYSS and for treating us to VIP tickets to her sold-out Stand Up For Pits – an incredible night filled with belly laughs, new friends, sloppy kisses and wiggly butts.