The rendezvous was planned for mid-morning at an undisclosed parking lot just off 83. The two participants had texted each other so they’d know what model car the other was driving, but it turned out to be unnecessary. On this particular morning, they were the only ones in sight.   It only took a few moments for the exchange to take place. Bags were unloaded from the trunk of one car into a waiting SUV and with that, one headed home and the other drove straight to the nearest police precinct.

This wasn’t a scene out of The Wire or another drug deal going down in badass Baltimore. This was a clandestine meeting of animal angels, one of whom wears a gun.

While the Baltimore police department has garnered a lot of national press lately (most of it bad), no one’s written about the army of officers who go above and beyond for the city’s homeless and abused animals.   If the truth be told, the top brass are also in the dark because these officers do it on their own time and on the down low.

Today’s exchange involved multiple bags of donated cat food so that caretakers in the Western District could continue to feed the neighborhood kitty colonies. “This woman doesn’t have a pot to pee in,” the officer told me. “But she spends every cent she has trying to feed and vet a colony of 10 cats. I just wanted to get her some help.”   For those who don’t know, the Western District was the epicenter of Baltimore’s “unrest” back in May and is a hot bed of animal abuse. Just recently this same officer participated in a late night trap session to relocate one of the neighborhood cat colonies to safety at a Maryland sanctuary for feral cats.

Then there’s the story earlier this week of two officers on patrol who saw a tiny kitten narrowly miss being hit by a car. When they caught it and realized it was just skin and bones, they wrapped it in blankets and delivered it to an off-duty officer to feed and temporarily care for. When their shift was over, they picked up the kitten and drove it to a foster in the county before going home, showering, and reporting back for their next duty shift.

Why do they do it? Why do they message SYSS and friendly rescues when they pick up an animal that’s seen hard times? Why do they choose to use treats and leashes instead of guns to subdue so-called dangerous dogs? Why do they agree to feed feral colonies on their rounds? And why do they volunteer in their off hours to do transports and foster animals until they’re healthy enough for adoption? The answer has nothing to do with company policy, and everything to do with an army of officers that believes a community is judged by how it treats its most defenseless, whether they struggle on two feet or four paws.

In the four years that Soft Side has been in existence, we’ve only seen one case where the BCPD allowed an officer’s story of compassion to become public. It was early on and that was Officer Waz, but the permission was rescinded the instant Soft Side was no longer in line with the City’s Mayor.   Since then, no officer has received an okay to participate publicly in any animal welfare efforts or events with Soft Side. From a public relations standpoint, it’s unfortunate, but we can tell you – it hasn’t stopped the good ones from getting involved.

We can’t divulge their names or their identities, but the Baltimore rescue community knows who they are and we couldn’t ask for more dedicated and caring partners in crime. 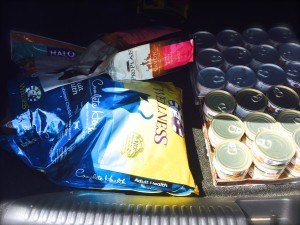 We’re grateful to AARF (Animals Allied Rescue Foundation) for joining us in answering this call. Periodically, we collect cat food, traps and feral houses to help out our partners in blue.  If you’d like to donate any or all of the above, email: gro.edistfosruoywohsnull@ofni.

1 thought on “Some Angels Carry Guns”