Anybody who knows me, knows I’m a worrier. It’s a tendency that usually reaches a fevered pitch at around 3 am.  Anytime we’re coming up an on event, I bolt awake right around that time and immediately start going down the list of all the things that could possibly go wrong.  No problematic stone goes unturned and, as the minutes crawl by, the only release from mental purgatory is the screech of my alarm clock at 6 am. Given that, it’s probably not a surprise that December has been especially rough on my ability to get a decent night’s sleep.

Over the course of a four-week period, we were hosting three fundraising events, welcoming one new Softie on board, embarking on a multi-day video shoot, launching #TeamSoftSide and promoting 9 players in 7 markets who would be sporting Soft Side during the NFL’s My Cause My Cleats games.  That alone was enough to send me over the edge, but the real culprit was our decision to do game day ticket giveaways and hold donation drives, featuring our Softies, in Houston, New Orleans, Pittsburgh, Baltimore and Tampa to order to help the shelters in those communities. 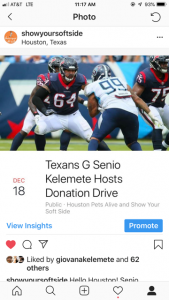 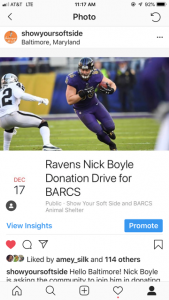 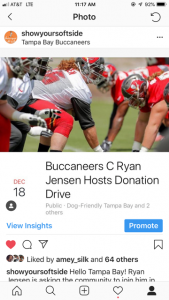 To say it was like planning the Normandy invasion would be an understatement.  Fortunately, we had a secret weapon in the form of one Emily Scerba who joined Soft Side after a career with the Ravens.  When she left Baltimore to move with her boyfriend to another city, she very kindly took Soft Side with her.  Emily single-handedly developed and coordinated a plan that would bring some Softie star power and new followers to each of our partner shelters. 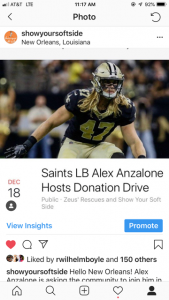 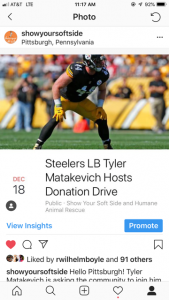 Those events, i.e., donation drives, were scheduled for Monday, December 17 and Tuesday, December 18.  My panic attacks started to show their ugly face four days prior.

On one particularly sleepless night, I stumbled into my office and texted Emily, “Can we talk later? There’s one aspect to all this that has me breathing out of a paper bag.”  Her response: “That the players show up? LOL.”

Truth is, not once in all of my early morning panic attacks did I ever worry that the Softies wouldn’t post.

Let that sink in for a minute.

We’re talking about a group of NFL stars, at the top of their form, and in the hunt for a play-off berth at the end of a grueling season and yet, I knew each and every one of them would show up as promised.  These guys are passionate about speaking up for the little guy, especially those that walk on four paws.  Instead what concerned me was what kind of reception they’d receive.

Would fans show up to meet them?  If not, would our Softies be disappointed? Would the shelters make the guys feel welcome when they arrived?  Or would they walk into an, “Oh hi, what are you here for?” Whether donations came in via truckload – or not – a visit like this could change people’s perceptions of shelter animals as second class citizens and my fear was, that wouldn’t come across to the guys who were so generously donating their time.

I was sweating bullets when on Monday, December 18, I headed for the airport, knowing that the Ravens Nick Boyle would be arriving momentarily at BARCS.  Nick had left the previous day’s game with a concussion and yet, his wife Kristina, had already texted me that they had every intention of following through.  It wasn’t until I was boarding my flight that I received a message from BARCS, “Nick is arriving at 12 noon, but we’re closed to the public till 2pm.”

Seriously? All those back and forths about the visit and I was just learning that now?  To say I was twitching for the entire two-hour flight is putting it mildly.  I was in full-out, panic freefall until landing in Tampa and the first of the happy texts dinged through.  “Nick and Kristina were so lovely.  They met and played with every animal in the shelter.” Ding. “I can’t tell you how much it meant to the staff.” 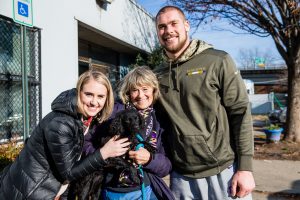 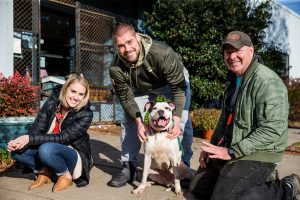 We were headed to Tampa for an entirely different reason.  We were there to shoot footage for a Soft Side video that we’re creating for use in classrooms, but realized we’d be able to do a twofer, i.e., shoot AND accompany the Buccaneer’s Ryan Jensen on his visit to our Tampa partner, Friends of Strays.

It was our timing that left a little to be desired.  The team had flown back to Tampa late Sunday, with Ryan’s wife, Stephanie, and baby, Wyatt, arriving back home late afternoon on Monday.  Tuesday was Ryan’s one day off leading up to Christmas and we had laid claim to it. Not only were we commandeering his time, we were also invading his space. After shooting for hours at the house, we headed 40 minutes south to the shelter.

If you’re not familiar with Friends of Strays, they’re small, but impressive.  As we entered, there was a small crowd waiting, which turned out to be fans in the form of staff and volunteers.  Unlike BARCS, they weren’t just closed to the public at that exact moment, but all day every Tuesday. Silent screams were raging through my head. I mean, really, who plans a donation drive on a day the shelter is closed?  However, those screams were quickly abated as we embarked on a tour of one of the cleanest, sweetest smelling animal shelters I’ve ever visited. 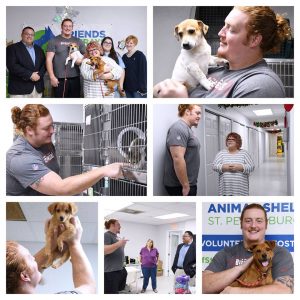 If you’ve ever seen Ryan around animals, you know that no cat or dog was going to go without a chin rub or cuddle.  We went from room to room, cage to cage and both animals and staff got Bid Red at his finest.  He genuinely wanted to know more about their operations and their needs, and immediately started brain storming as to how he might help.  It no longer mattered whether they were open to the public or not, Friends of Strays had just found themselves a bona fide Softie supporter. 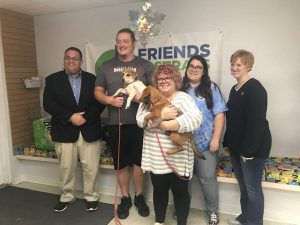 Throughout the day, my phone had been buzzing.  Photos were arriving of the Pittsburgh Steelers Tyler Matakevich at Humane Animal Rescue where fans showed up with donations and their own terrible towels. (Since Tyler joined #TeamSoftSide, we now refer to them as Terrific Towels.) 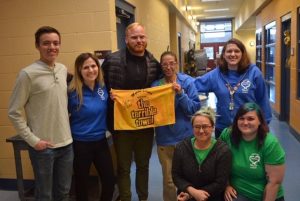 In between playing with every dog in the shelter, Tyler posed with fans and gave signed posters to the staff. 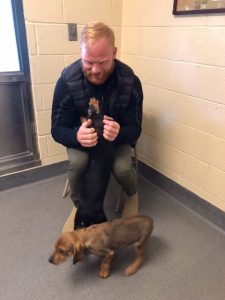 I was tallying in my head, three down, two to go when a text came in from Giovana Kelemete.  She and her husband, Senio Kelemete, Offensive Guard for the Houston Texans were running late, but on their way to Houston Pets Alive now.   I was praying silently, please let them be open.  Turns out they were, but it wouldn’t have mattered since all the Kelemete’s wanted to do was pitch in to help walk and play with the dogs.  That’s what’s so ironic.  My fear all along was whether there would be enough fans on hand to make our Softies feel appreciated, when to a man – they all just wanted to spend some time with the animals and thank the staff for their efforts.  “We had so much fun,” texted Giovana, “Senio is hoping to recruit some of the O Line to come back with him next time.” 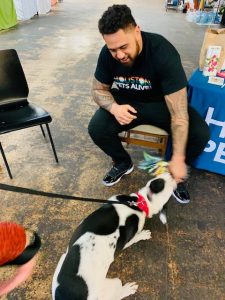 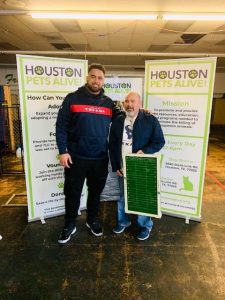 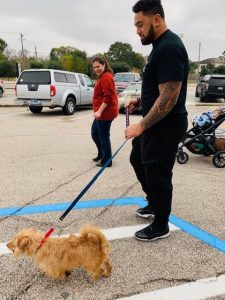 Even with the positive feedback from Baltimore, Tampa, Houston and Pittsburgh, my worrying didn’t end.  I hadn’t heard a peep from the New Orleans Saints Alex Anzalone and his fiancé, Lindsey, so had already convinced myself their day must have been a bust.  It took me 24 hours to work up the nerve to text, “I’ve been too scared to ask, but did it go okay yesterday?”  Two seconds later, a response dinged through.  “Yes, it went so well.  Michelle and Zeus’ Place Rescue are awesome – thank you so much for introducing us.”  The photos that followed bore it out – Alex and Lindsey covered in puppies and smiling ear-to-ear. 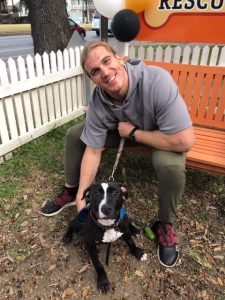 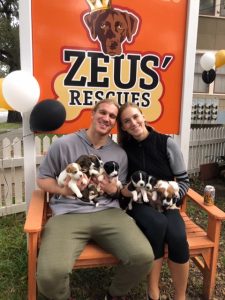 This was the first time we’ve tried anything so ambitious and, in spite of changing NFL schedules, injuries and the added hurdle of the holidays, it paid off.  Five shelters in cities across the country met face-to-face with some of our most passionate Softies and new relationships were formed.

Does that mean I can stop worrying and start sleeping now?  Probably not.  Because for me, it’s not about whether something we try is a success or failure.  It’s about knowing what a gift it is to have Softies who genuinely care and are so giving of their time.  And until the day when I can be assured that everyone adores and appreciates them as much as we do, you’ll find me at 3 am sweating bullets.