It was just a little over a year ago that Hurricane Sandy came bearing down on the East Coast.  While most of us were fretting about whether we’d have Internet or TV, the staff at BARCS was worrying about whether the 200 plus animals in its care would come out alive.  Housed in a cramped, aging facility located in a flood plain, just feet from the river, BARCS was notorious for springing leaks in heavy rains – how would it fare in what scientists were calling the hurricane of the century?    Local news media reported that City officials were meeting to put emergency plans into effect, yet none of those seemed to include BARCS.   That was when Jen Brause, the Executive Director at BARCS, decided to make plans of her own.  She called Frank Remesch, General Manager of the Baltimore Arena and asked if he’d be willing to house the animals there.  It took all of five seconds for him to say yes.

In preparation, calls went out for transport and volunteers.  Hoffberger Moving immediately said, we’ll put trucks at your disposal.  Meanwhile, every rescue in Baltimore encouraged their supporters to mobilize at BARCS early on October 29 for what would be a massive undertaking.  SYSS was one of the groups alerted and we promptly asked if any of our Softies could help.

At 7:30AM on October 29, we made our way to BARCS in high winds and driving rain.  We weren’t alone, nearly 100 people were jammed in BARCS’ waiting room getting their walking orders with more stationed at Baltimore Arena to unload the influx of animals headed their way.  A number of Softies joined us – MMA fighters Dave Daniecki and Dan Root, boxer Chris Nissley and a contingent of Rallo brothers since Big John was halfway across the country at the time.  Each brought brothers, girlfriends, wives and friends along to help.

The camaraderie that day was amazing.  By mid morning, over 200 kitties and pups were safe, dry, fed and watered in their temporary home.  Some took it in stride, while others were visibly frightened and upset.  A number of the more distraught animals ended up going home with volunteers who couldn’t bear to leave them in such a state.  For the next 24 hours, BARCS’ staff and volunteers slept on floors and dined on power bars in order to walk, feed, cuddle and care for the homeless animals displaced during Hurricane Sandy.  The next day, the operation took place in reverse and by nightfall, BARCS was back to normal again.

For all the pain and destruction that Hurricane Sandy wrought, it also gave us a chance to see a side of Baltimore we’ll cherish forever – ordinary people coming out in droves to help those less fortunate and those that our leaders often forget. 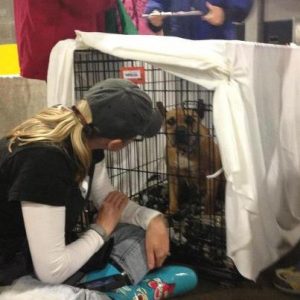 For at least one pup, Hurricane Sandy proved to be her lucky day.  A pit bull named Sister Nancy who was long on years and short on time having already outlived her stray hold.  One of the volunteers that day was so moved by her sad demeanor, he took her home when he left.  Since that day, Sister Nancy has beaten cancer and the odds, but is still looking for her forever home.  The perfect ending to this story hasn’t been written yet.  We’d love to see Sister Nancy finally get the forever home she so justly deserves.  For inquires, visit www.midatlanticbullybuddies.org.

2 thoughts on “The Forgotten Ones”