He’s been called the world’s most highly trained covert operative and travels the globe in the fight against terrorism and human trafficking.  When John Thompson of the National Sheriffs’ Association told us about his Board member and suggested we add him to our roster of Softies, we thought he was exaggerating.  He wasn’t.  Tony Schiena is a real-life superhero.

Not surprisingly, Schiena’s a man accustomed to danger, having protected those targeted for assassination.  He’s trained soldiers in Pakistan, Afghanistan, Iraq, North Africa and Russia and exposed ISIS after they released chemical weapons on the Kurds.  Tony credits his physical and mental strength to martial arts and was a karate champion at a young age.  Spotting his potential, he was recruited into the intelligence services during his first year studying law in his native South Africa.  It was a tumultuous and dangerous time, as the country was on the brink of civil war during the final days of apartheid.  After working in London, he moved to LA and continued to compete at the highest levels, rising to become the World Heavyweight Karate Champion.  After breaking both ankles in training, he retired early and undefeated at 25.  He was the first person ever to receive the Martial Arts Hall of Fame Silent Heroes Award. 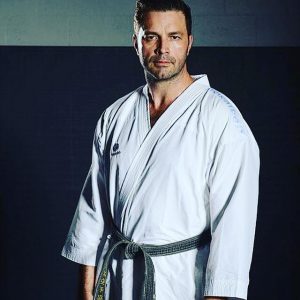 Most people would have rested on their laurels at that point, but Tony then went on to have a successful movie career, first starring in Merchant of Venice with Al Pacino and Jeremy Irons, moving on to make a dozen more films thereafter, including action thrillers Dot Kill, Lionsgate’s Circle of Pain, and Locked Down.  In 2016, he co-wrote, produced and starred in The Darc — a trifecta rarely seen in Hollywood — about the Japanese mob, which will soon be released. 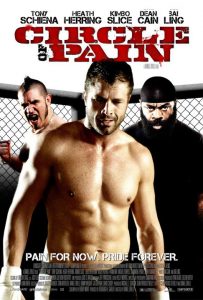 Schiena continues to work in hostile environments as the CEO of MOSAIC (Multi-Operational Security Agency Intelligence Company), a security and defense firm headquartered in London.  For the past decade, he has been on the front lines protecting children from sexual predators and human trafficking.  He serves on the Board of Governors of the Global Society of Homeland Security Professionals of the National Sheriffs’ Association, is a Deputy Sheriff in Virginia, and a Lieutenant on the ICAC (Internet Crimes Against Children) federal task force. We caught up with him in D.C. while he was attending the annual conference of the National Sheriffs’ Association.

Tony travels too much to have a dog of his own, but he welcomed the opportunity to join a cadre of tough role models, including his friend Tommy Lee of Motley Crue, to show that kindness toward animals is a strength, not a weakness.  We paired him with Wynona, a little pibble tripod who had recently been rescued.  We were a bit concerned whether Wynona could handle the demands of an hour-long photo shoot with a complete stranger, but she settled easily and felt safe in his arms. Wynona was a bit star struck and so were we. 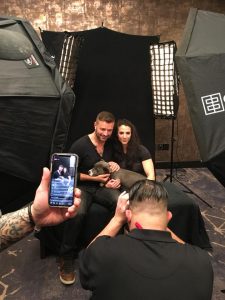 It is an honor to have you join our campaign, Tony Schiena.  Thank you for making the world a safer place for the most vulnerable and for including animals among those you so ably protect.

Note:  This one’s worth the wait.  Stay tuned because we’ll soon be unveiling Tony Schiena’s Soft Side poster with Wynona from Key to a Lion’s Heart rescue.