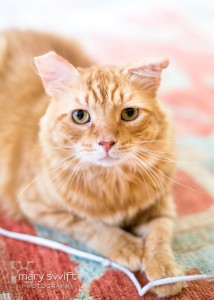 It was only our second time volunteering at the secret kitty sanctuary when we were cautioned that there was a feral kitty tucked away in the back room. After having recently trapped and transported a feral to the vet only to see it fly around the examining room as if winged, I admit I was hesitant to head back there. A short while later, my husband bravely ventured inside and immediately called out, “This kitty is so sweet.”

That was the first time I ever saw The Colonel – a giant poof of orange fur, no tail, a bent ear and the saddest eyes I’ve ever seen. Yet after living on the streets for at least a year, it seemed all he wanted was to be loved. I opened his cage a few inches to make it easier to rub his chin and he gently pushed his way out and climbed into my lap. Over the next bunch of weeks, that “lap time” became our ritual. I couldn’t wait for my feeding duties just to have some alone time with this big, handsome guy so it was with great sadness the day I arrived to discover The Colonel had gone to a temporary foster home.

It would be fair to ask why if this cat had made such a dent on my heart hadn’t I considered taking him home? The answer was so simple, yet so very wrong – The Colonel has tested positive for FIV.  Not knowing what we know now, neither my husband nor I were prepared to make a move that might put our own big boy at risk.

That said, over the coming months, I couldn’t get The Colonel out of my mind. I continued to check his foster’s Facebook page every day for sightings or updates. At one point, we even went to visit him in the hopes that maybe, just maybe we could find a way to make this work. Yet each time, we succumbed to the fear mongering that adopting an FIV+ cat might somehow compromise our own rescue kitty’s future health and happiness.

The story might have ended there if not for a chance dinner one evening with rescue friends. Someone mentioned that they’d heard The Colonel had not received any adoption applications and might be headed for boarding soon. Although incredibly generous in opening their home to both The Colonel and another FIV+ kitty named Elvis, the days had turned into months and the foster’s family dog was becoming increasingly stressed by the not-so-temporary visitors.

The thought of The Colonel being confined in a cage again ate at me. I kept flashing back to those early days after he was rescued and how desperate he’d been for human touch. My husband and I talked, argued and finally decided we would foster – and I do mean foster. I was convinced between friends of ours and friends of Soft Side, we could find him a home.

That was two and a half months ago, and I was right. 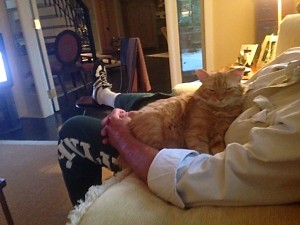 We found him the perfect home and we found it quite quickly.

A home where he sleeps cuddled with his parents in bed at night and plays fishing pole all day. A home where he is adored by his family and tolerated by his older four-legged brother. A home where his squeaky little meows are answered and there’s always a sunny spot to nap in. In other words, a home where FIV is nothing more than three letters on a page and will never keep him from living a long and, hopefully, purr-filled life. 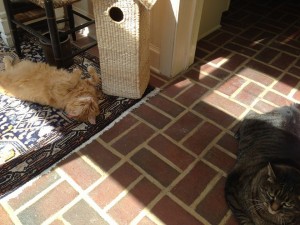 We couldn’t be happier at how this story finally ended. Fear and myths nearly kept us from having this happy, sweet, loveable little guy in our lives. We’ve since renamed him Bugsy in honor of his bunny tail and crooked ear, and although he still annoys his big brother on occasion, he knows he’s finally home where he belongs.

Elvis, his former foster buddy and comrade in FIV+ stigma is still looking for his forever home. Another street-kitty-turned-lover-boy who’s saddled with three letters that can easily be erased with a four-letter word called love. To meet him, contact Recycled Love Rescue. 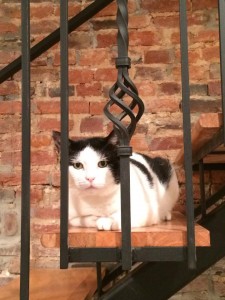