We’ve long wanted to pay tribute to our photographer extraordinaire, Leo Howard Lubow.  Sande or Lori could just have easily penned this blog post, but my version comes with a confession.  I had a crush on Leo 35 years ago.

Most people assume Leo has always been a professional photographer, given his gift with the camera, but he mastered his craft relatively late in life.  Leo is a Renaissance man whose interests range from ancient languages to philosophy and he wrote a novel while flourishing as a trial attorney. 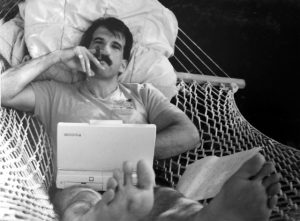 Our paths first crossed in 1983, when I was a college junior.  I had considered going to law school and applied for an internship at a boutique firm where Leo was an associate.  I had no useful skills and spent my time making photocopies, deliveries and coffee.  Leo was starting a jury trial and the managing partner suggested I watch him in court.  I was mesmerized — and a bit star struck.

Leo was handsome, smart and articulate and had a gift that all lawyers covet, but few actually possess:  presence in the courtroom.  I don’t remember much about the case, but watching Leo conduct cross-examination solidified my interest in becoming a lawyer.  But I digress.

Despite his success, the creative side of his brain beckoned.  Between discovery, motions and deadlines, he wrote a book that drew on his experience as a trial lawyer, but weaved other interests as well.  It was an “existential thriller” that some have likened a precursor to The Da Vinci Code.  Not one, but two distinguished agents were interested.

The chosen agent was so exuberant that he not only sent copies to 20 publishing houses, but also to Oliver Stone.  Leo’s hopes soared and then were dashed when the book was not purchased at auction.  Deflated and exhausted, Leo lacked the energy to write another book or return to his 7-day work week.  It was time to wind down his practice and explore other options.

He finally had time to pick up a camera, another lifelong interest, and immersed himself with both the technical aspects and the philosophy that drove the great masters.  Leo was drawn to photography for its capacity to capture for eternity the soul of an individual at a moment in time. 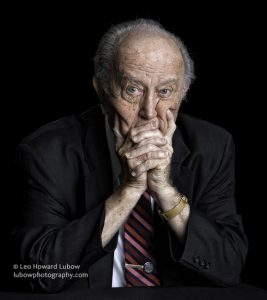 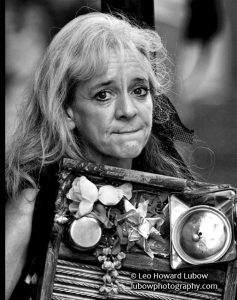 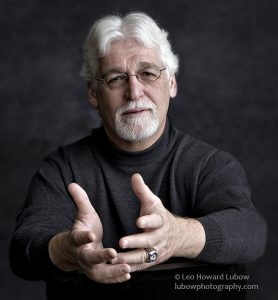 Fast forward 15 years and Sande Riesett asked Leo if he would photograph 3 professional athletes for her anti-cruelty campaign.  With Lori Smyth’s contacts in the sports world, he photographed Orioles center-fielder Adam Jones, MMA Fighter John Rallo, and Ravens linebacker Jarret Johnson.   The results were magical and the photographs literally travelled around the globe overnight.

His images reveal the vulnerability of animals — and the need to protect them — better than any words.  They also capture the intimate relationship between each athlete and their dog or cat, thereby revealing a dimension of their humanity that we would not otherwise see.  His ultimate goal is to reach children, but he’s a realist who recognizes that a single photograph may not change a mindset, but might shift its axis a few degrees.  We think he has succeeded. 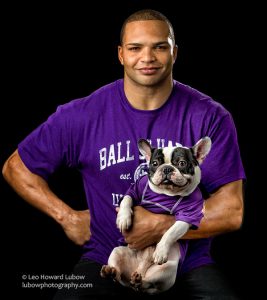 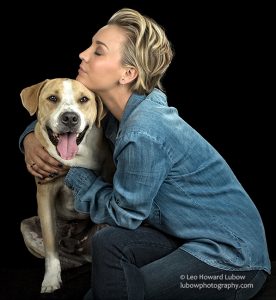 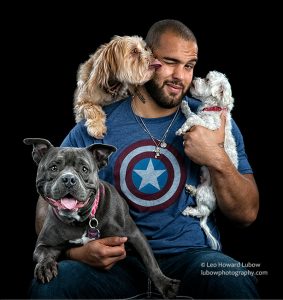 If a picture is worth a thousand words, then Leo’s Soft Side portraits are worth ten thousand, as each new Softie breathes new life into our campaign.  He’s also the ultimate Softie who rarely travels without his devoted and beloved assistant Archie, whom he adopted from BARCS. 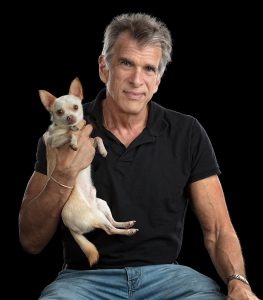 I admired him 35 years ago, but I admire him more now.  Thank you, Leo Howard Lubow, for making the world a better and more humane place.  We couldn’t do this without you.

To view more of Leo’s work, visit his website or take a trip down the 150+ posters and numerous outtakes of the Show Your Soft Side campaign. (And a special thanks to Virgil Ocampo for the cover shot of Leo in action.)

1 thought on “A Tribute, But First, A Confession”