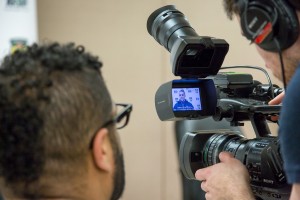 Anytime I see a text from Torrey or Chanel Smith, I know it’s going to be good. It could be a video of TJ with his pibble sister, Mama, or a photo of a young Soft Side fan whose battle with cancer included a special invite to a Ravens practice. As predicted, this one made me grin ear-to-ear. It seemed that Animal Planet wanted to include Baltimore on its Road to the Puppy Bowl and would it be okay if she gave them my contact info? Uh….yeahhhhhh.

I mean, really, who isn’t a rabid Puppy Bowl fan? What’s not to love about adorable furballs romping on the field and kitty cheerleaders urging them on? Who doesn’t, at some point during the season, wish The Puppy Bowl Ref would moonlight on Sundays?

Emails went furiously back and forth, a phone conference was scheduled and soon we had a date. On December 5, the Road to the Puppy Bowl would be lined in purple. Not only would the public be invited to adopt their own MVP at BARCS, but Animal Planet would cover the adoption fees and the new parents would be filmed for this year’s Puppy Bowl. Even cooler, they’d have Ravens players and Big Softies Torrey Smith and Michael Campanaro there to cheer them on.

For those who don’t know BARCS (Baltimore Animal Rescue Care Shelter) it’s an open admission shelter in an urban city where the number of animals dumped far outweighs the resources. And that’s putting it mildly. It’s located in an antiquated building on a flood plain that barely rates stepchild status among the city’s leaders. That said, what they lack in funding, they more than make up for in heart. 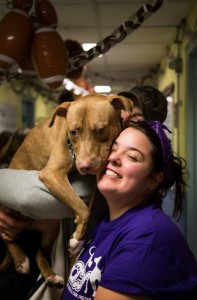 Melanie Snyder, Programs Manager, and Juliette Crosson, Rescue Coordinator, rallied staff and volunteers, and over the course of the next few weeks, set about transforming the shelter from “government chic” into a purple palace. They organized volunteer photo shoots of all the kitties and pups in their Ravens gear and duly noted each as rookie, draft pick or injury reserve. I’m pretty sure they’d agree, it was one of the toughest secrets any of us have ever had to keep. 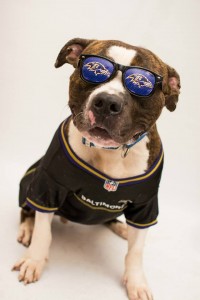 Finally, December 5th arrived and along with it came a miserable cold, dreary rain. We all feared what it might mean in terms of attendance, given it was a Friday late afternoon/evening event and traffic had been at a gridlock all day, but within moments of the Animal Planet team arriving – it was full speed ahead. The doors were set to open at three and people were already waiting outside. 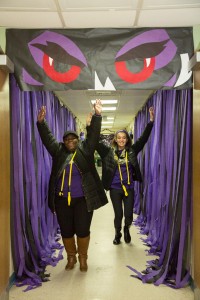 Often the scene of heartbreaking moments as abused and neglected animals are brought in – on this day, BARCS was a place of happy tears. It started with the arrival of Melynda and Peter. An hour earlier, they’d gotten a call telling them BARCS found their pup who, as it turned out, had been stolen three years before. The reunion was the stuff of Hollywood. The pup named Freeway was overjoyed and jumped onto his Mom’s lap whimpering and doing happy circles in between big, sloppy kisses. 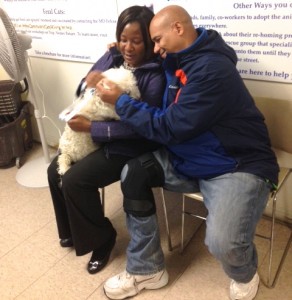 Back out in the main lobby, things were now in full swing. Both the pup and the kitty locker rooms were seeing some action as people met and decided on who would make the best addition to their families. When the match became official, a bell would ring and everyone – staff, guests, the crew from Animal Planet and reps from the Ravens – would break into spontaneous applause. 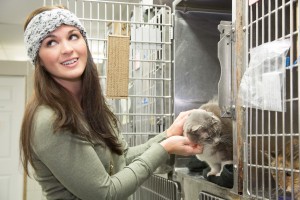 We kept hearing reports that traffic was a nightmare, but right on time – Torrey Smith, along with his wife Chanel and our Littlest Softie, TJ, came walking through the door. Alongside was fellow wide receiver and rising star, Michael Campanaro. 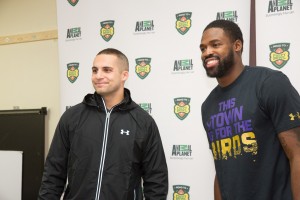 Like everyone else that evening, they toured the locker rooms, snuck treats to pups and cuddled kitties before being interviewed by the Animal Planet film crew. Come Puppy Bowl day, you’ll see those interviews along with others from various teams in the NFL. We have no doubt that all sincerely care and want to help the animals in their community, but we’re betting few have backed it up the way Torrey and Chanel Smith have. 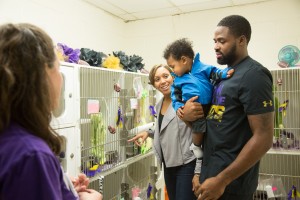 Torrey first became involved when he agreed to pose for the Show Your Soft Side campaign at the close of his rookie year. A few months later, he joined us for Soft Side Night at Camden Yards and that night learned for the first time about the number of Baltimore animals desperate for real homes. You could almost see the wheels turning in his head and, sure enough, a few weeks later – he called to say he wanted to adopt a BARCS shelter pup. 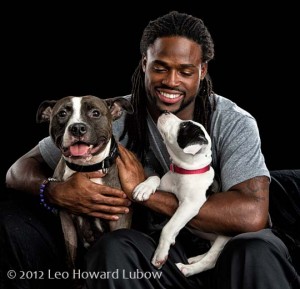 Over the past two and a half years, Torrey has come through every time we’ve asked for help. He’s hosted fundraisers, been a visible face of opposition to breed profiling in Maryland, been on hand to thank the local rescue community for their tireless efforts, tweeted, posted and even insisted on having both pups take part in his marriage proposal to Chanel. Recently when he heard that we had sent our last signed Torrey poster to a young cancer patient in Philadelphia – he promptly called and invited the 8-year old to be his guest at a Ravens practice. 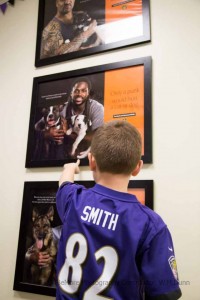 Ironically the only faux pas of the day was mine.

During the interview, Animal Planet asked what effects Torrey thought his efforts had had and, like a deer in the headlights, he yelled out, “Sande” for a little help on that one. Caught off guard, I babbled on about how Torrey now outranks even Hollywood movie stars like Kevin Bacon when it comes to celebs that love pit bulls. 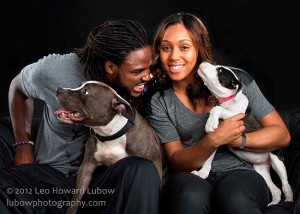 That’s absolutely true, but the real answer is, Torrey (and Chanel’s) involvement (and sincerity doing it) has brought an army of new people to the cause here in Maryland. (Not to mention, a number of his teammates and other NFL players) Torrey has helped gain attention for BARCS, made it cool to adopt a shelter pet and macho to have a soft side. When we go into schools, kids who have never even attended a Ravens game all know about Torrey Smith and his love for Mama and Prince. (Of course we’d by lying if we didn’t say we also enjoy hearing from Steeler and Pats fans who say – because of Torrey they’re jumping ship and rooting for the Ravens. Then again, being Dad to the cutest Little Softie on earth doesn’t hurt Torrey’s popularity either.) 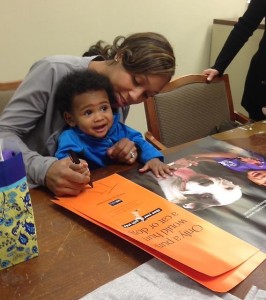 Both Torrey and Michael spoke passionately about their reasons for wanting to help and we hope that message resonates far and wide. (We know for a fact, it worked here in Baltimore since Michael promptly called his girlfriend to meet him and start the search for her own MVP.)

Truth is, we’ve come to think of SYSS as a team in and of itself and that was borne out when Big Softie and MMA legend, John Rallo, stopped in to pay his regards.   Cradling a tiny kitten that had recently come in, John spoke eloquently on why homeless dogs and cats deserve our time, energy and care. And if you’ve ever seen all six foot one, 265 lbs of tattooed muscle that is John Rallo, you’ll know why it’s a damn good idea to listen up. 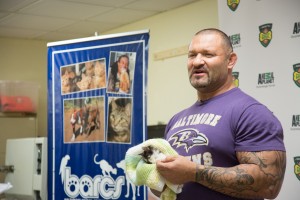 We can’t thank Animal Planet enough for including SYSS and BARCS on the Road to the Puppy Bowl. It’s still a few months before any of us will see the results of the filming, but the night itself was magic. For the staff and volunteers at BARCS, it was recognition for the tireless work they do every day. For the lucky adopters, it was a chance to find their four-legged MVP and be cheered by their hometown heroes in the process. And for animals like Tank and Ellie – just two of the 49 lucky ones who found forever homes that weekend – it was truly a dream come true.

Come February 1, you can bet we’ll be glued to The Puppy Bowl with all of our cats and dogs at our side reliving every wonderful moment of the day Animal Planet came to the aid of the homeless animals in Baltimore. 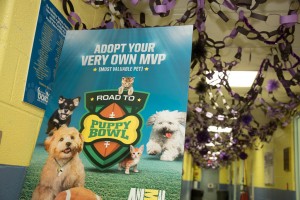