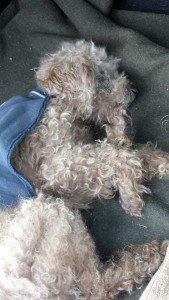 We often say – we don’t know how shelter staff and rescue volunteers do it.  We can’t imagine the toll it takes on your heart and your psyche to see a daily parade of dumped, abandoned, surrendered and abused animals and yet have so few resources to put at their disposal. Most days, we’re ten steps removed – we’re hearing it second hand and sharing the best we can – except for those mornings when our inbox contains the bombshells.  This week, that number has been higher than most.

First there was a message from a father whose teenage daughter brought home a dog after hearing its owner threaten to shoot it.  The father wanted to help, but with three other dogs of his own, keeping it permanently was not an option.  That was followed by a message from a police officer in Baltimore City.  She and a few of her colleagues had come to the aid of a kitten stuck on the roof of an abandoned house.  After getting the kitten to safety, they stumbled on to the kitten’s mom and siblings – starving and living off garbage in a bad part of town.  Both the father and the police officers were looking for someone to help, but there is no 911 for either situation. The options are, walk away or possibly call Animal Control, which, in the case of the rescued dog, wouldn’t have fared well considering the county they lived in.

The next message was even more desperate.  It came from a woman who was driving to work just over the MD/PA line when she saw a dog stumbling in the road.  She pulled over to help the little guy and found an elderly poodle barely able to stand, matted in feces and shivering from fright.  She wrapped him in a blanket and took him with her to work, but now faced the million-dollar question of what to do next.  There is no 911 for situations like this so she, like the others mentioned above, messaged SYSS in an act of desperation. Reading those messages, we understood for the first time the frustration and helplessness that shelter workers and rescuers must feel everyday. That said, Baltimore does have one resource that other cities would be envious of – a passionate and responsive rescue community.

We suggested the father contact Rescue Well’s hotline and within minutes, they responded.  For the kitty family in need, we contacted The Feline Rescue Association and by evening, someone had visited the area, fed the kitties and alerted Best Friends to another colony that needed help.  In regards to the pup found on a PA road, we messaged Animals Allied Rescue Foundation (AARF) and it took them all of two seconds to say they’d take the little guy on.  Two hours later, the angel who found him delivered him to Academy Animal Hospital and into the arms of AARF.

None of these rescues get city, county or state help.  They depend on kind souls willing to foster and generous hearts willing to donate.  All of them do what they do on a volunteer basis with no thanks from anyone, except the animals they save.  This week’s blog is dedicated to them – an amazing group of people who could use your support.  This week they were our 911 and they can’t do it without your help.